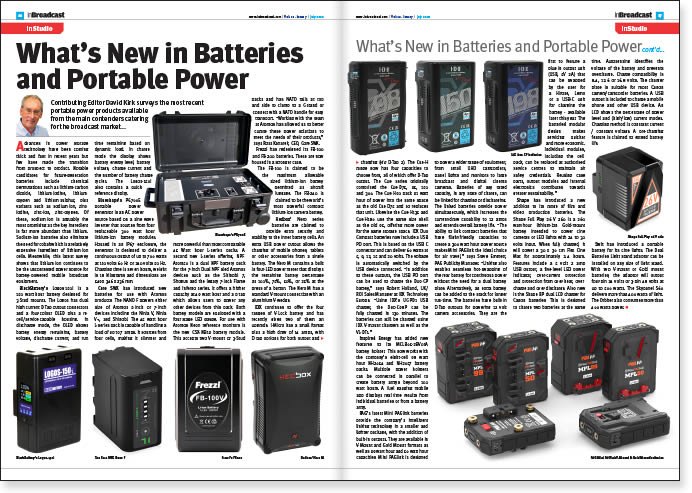 Advances in power storage technology have been coming thick and fast in recent years but few have made the transition from prospect to product. Notable candidates for future-generation batteries include chemical permutations such as lithium-carbon dioxide, lithium-iodine, lithium-oxygen and lithium-sulphur, plus variants such as sodium-ion, zinc-iodine, zinc-ion, zinc-oxygen. Of these, sodium-ion is arguably the most promising as the key ingredient is far more abundant than lithium. Sodium-ion batteries also eliminate the need for cobalt which is a relatively expensive ingredient of lithium-ion cells. Meanwhile, this latest survey shows that lithium-ion continues to be the uncontested power source for battery-powered mobile broadcast equipment.

Blueshape’s PG700E portable power generator is an AC power source based on a sine wave inverter that sources from four replaceable 300 watt hour lithium-ion battery modules. Housed in an IP67 enclosure, the generator is designed to deliver a continuous output of up to 700 watts at 110 volts 60 Hz or 240 volts 50 Hz. Charging time is seven hours, weight is 18 kilograms and dimensions are 549 x 346 x 236 mm.

Core SWX has introduced new batteries for use with Atomos products. The NANO-F powers either size of Atomos 5-inch or 7-inch devices including the Ninja V, Ninja V+, and Shinobi. The 45 watt hour L-series pack is capable of handling a load of up to 7 amps. It sources from four cells, making it slimmer and more powerful than most comparable 45 Watt hour L-series packs. A second new L-series offering, NPF-Atom50 is a dual NPF battery pack for the 7-inch Dual NPF sled Atomos devices such as the Shinobi 7, Shogun and the legacy 7-inch Flame and Inferno series. It offers a higher capacity at 49 watt hour and a p-tap which allows users to power any other devices from this pack. Both battery models are equipped with a four-stage LED gauge. For use with Atomos Neon reference monitors is the new CSX-NB19 battery module. This accepts two V-mount or 3-Stud packs and has NATO rails at top and side to clamp to a C-stand or connect with a NATO handle for easy transport. “Working with the team at Atomos has allowed us to better curate these power solutions to meet the needs of their products,” says Ross Kanarek, CEO, Core SWX.

Frezzi has redesigned its FB-100 and FB-200 batteries. These are now housed in a stronger case.

Hedbox’ Nero series batteries are claimed to provide extra security and stability to the inner battery cells. An extra USB power output allows the charging of mobile phones, tablets or other accessories from a single battery. The Nero M contains a built in four-LED power meter that displays the remaining battery percentage as 100%, 75%, 50%, or 25% at the press of a button. The Nero M has a standard V-mount connection with an aluminium V-wedge.

IDX continues to offer the four ranges of V-Lock battery and has recently given two of them an upgrade. I-Micro has a small format plus a high draw of 14 amps, with D-tap options for both output and charging (via D-Tap 2). The Cue-H range now has four capacities to choose from, all of which offer D-Tap output. The Cue series originally comprised the Cue-D75, 95, 150 and 300. The Cue-H90 pack 91 watt hour of power into the same space as the old Cue-D75 and so replaces that unit. Likewise the Cue-H135 and Cue-H180 use the same size shell as the old 95, offering more power for the same storage space. IDX Duo Compact batteries now include a USB PD port. This is based on the USB C connector and can deliver 60 watts at 5, 9, 12, 15 and 20 volts. The voltage is automatically switched by the USB device connected. “In addition to these outputs, the USB PD port can be used to charge the Duo-CP battery,” says Robert Holland, UK/ROI Sales Manager at IDX Technology Europe. “Using IDX’s UC-PD1 USB charger, the Duo-C98P can be fully charged in 130 minutes. The batteries can still be charged using IDX V-mount chargers as well as the VL-DT1.”

Inspired Energy has added new features to its MCLB05-2BV01A battery holster. This now works with the company’s eight-cell 98 watt hour NH2054 and NH2057 battery packs. Multiple power holsters can be connected in parallel to create battery arrays beyond 100 watt hours. A fuel gauging mobile app displays real-time results from individual batteries or from a battery array.

PAG’s latest Mini PAGlink batteries provide the company’s intelligent linking technology in a smaller and lighter package, with the addition of built-in outputs. They are available in V-Mount and Gold Mount formats as well as 99 watt hour and 50 watt hour capacities. Mini PAGlink is designed to power a wider range of equipment, from small UHD camcorders, panel lights and monitors to large broadcast and digital cinema cameras. Batteries of any rated capacity, in any state of charge, can be linked for charging or discharging. The linked batteries provide power simultaneously, which increases the current-draw capability to 12 amps and extends overall battery life.  “The ability to link compact batteries that have flight-friendly capacities to create a 300 watt hour power source makes Mini PAGlink the ideal choice for air travel,” says Steve Emmett, PAG Publicity Manager. “Linking also enables seamless hot-swapping of the rear battery for continuous power without the need for a dual battery plate. Alternatively, an extra battery can be added to the stack for longer run-time. The batteries have built-in D-Tap outputs for powering 12 volt camera accessories. They are the first to feature a plug-in output unit (USB, 5V 2A) that can be swapped by the user for a Hirose, Lemo or a USB-C unit for charging the battery - available later this year. The batteries’ modular design makes servicing quicker and more economic. Individual modules, including the cell-pack, can be replaced at authorised service centres to maintain air safety credentials. Reusing case parts, output modules and internal electronics contributes towards greater sustainability.”

Shape has introduced a new addition to its range of film and video production batteries. The Shape Full Play 26 V 260 is a 260 watt-hour lithium-ion Gold-mount battery intended to power cine cameras or LED lights with 24 to 30 volts input. When fully charged, it will power a 30 x 30 cm Flex Cine Mat for approximately 2.4 hours. Features include a 5 volt 2 amp USB output, a five-level LED power indicator, over-current protection and protection from over-heat, over-charge and over-discharge. Also new is the Shape BP dual LCD charger for Canon batteries. This is designed to charge two batteries at the same time. Autosensing identifies the voltage of the battery and prevents overcharge. Charge compatibility is 8.4, 12.6 or 16.8 volts. The charger plate is suitable for most Canon camera/camcorder batteries. A USB output is included to charge a mobile phone and other USB device. An LCD shows the percentage of power level and (high/low) current modes. Charging method is constant current / constant voltage. A pre-charging feature is claimed to extend battery life.

Swit has introduced a portable battery for its cine lights. The Dual Batteries Light stand adaptor can be installed on any size of light stand. With two V-mount or Gold mount batteries, the adaptor will output four-pin 24 volts or 3-pin 48 volts at up to 500 watts. The Skypanel S60 delivers more than 400 watts of light. The Orbiter also consumes more than 400 watts power.