The Greening of Streaming 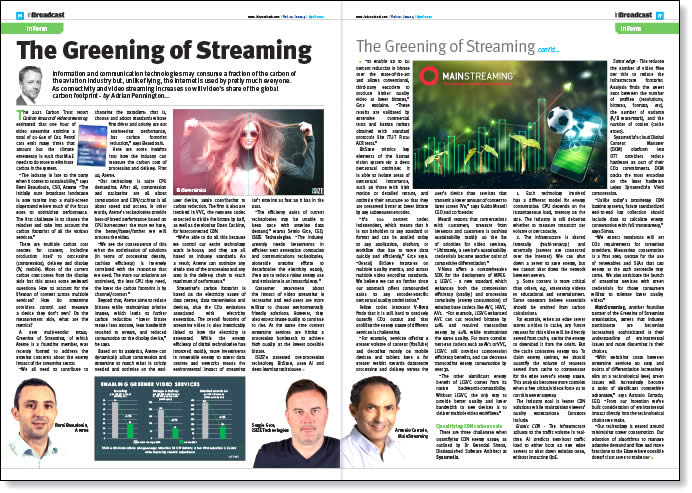 Information and communication technologies may consume a fraction of the carbon of the aviation industry but, unlike flying, the internet is used by pretty much everyone. As connectivity and video streaming increases so will video’s share of the global carbon footprint - by Adrian Pennington...

The 2021 Carbon Trust report Carbon impact of video streaming estimated that one hour of video streaming emitting a total of 50-60g of Co2. Petrol cars emit many times that amount but the climate emergency is such that M&E needs to do more to eliminate carbon in the system.

“The industry is late to the party when it comes to sustainability,” says Remi Beaudouin, CSO, Ateme. “The initially pure broadcast landscape is now turning into a multi-screen playground where much of the focus goes to optimizing performance. The first challenge is to change the mindset and take into account the carbon footprint of all the various services.”

There are multiple carbon cost centres for content, including production itself to processing (compression), delivery and display (TV, mobile). Most of the current carbon cost comes from the display side but this poses some awkward questions: How to account for the lifespan of content across multiple services? How do streaming providers control and measure a device they don’t own?

On the measurement side, what are the metrics?
A new multi-vendor group, Greening of Streaming, of which Ateme is a founding member, was recently formed to address the growing concerns about the energy impact of the streaming sector.

“We all need to contribute to changing the paradigm: that is, choose and adopt standards whose first driver and priority are not engineering performance, but carbon footprint reduction,” says Beaudouin.

Here are some insights into how the industry can measure the carbon cost of processing and delivery. First up, Ateme.

“Our technology is quite CPU demanding. After all, compression and packaging are all about computation and CDN/caching is all about speed and access. In other words, Ateme’s technologies provide best-of-breed performance based on CPU horsepower: the more we have, the better/faster/further we will process the video.

“We see the consequence of this when the optimisation of solutions (in terms of processing density, caching efficiency) is inversely correlated with the resources that we need. The more our solutions are optimised, the less CPU they need, the lower the carbon footprint is by channel/content.”

Beyond that, Ateme aims to reduce bitrates while maintaining pristine images, which leads to further carbon reduction: “lower bitrate means less storage, less bandwidth required to stream, and reduced consumption on the display device,” he says.

Based on its analytics, Ateme can dynamically adjust compression and streaming to match what is strictly needed and optimise on the end-user device, again contributing to carbon reduction. The firm is also are involved in VVC, the next-gen codec expected to divide the bitrate by half, as well as developing Open Caching, for Interconnected CDN.

“We’re able to do all this because we control our entire technology stack in-house, and they are all based on industry standards. As a result, Ateme can optimize any single step of the processing and any step in the delivery chain to reach maximum of performance.”

Streaming’s carbon footprint is based on the electricity usage of data centres, data transmission and devices, plus the CO2 emissions associated with electricity generation. The overall footprint of streaming video is also inextricably linked to how the electricity is generated. While the energy efficiency of digital technologies has improved rapidly, more investments in renewable energy to power data centres and networks means the environmental impact of streaming isn’t growing as fast as it has in the past.

“The efficiency gains of current technologies may be unable to keep pace with growing data demand,” warns Sergio Grce, CEO, iSIZE Technologies. “The industry urgently needs investments in efficient next generation computing and communications technologies, alongside ongoing efforts to decarbonise the electricity supply, if we are to reduce rising energy use and emissions in an impactful way.”

Consumer awareness about the impact of video streaming is increasing and end-users are more willing to choose environmentally friendly solutions. However, they also expect image quality to continue to rise. At the same time content streaming services are hitting a processing bottleneck to achieve high quality at the lowest possible bitrate.

BitSave mimics key elements of the human vision system via a deep perceptual optimiser. It is able to isolate areas of perceptual importance, such as those with high motion or detailed texture, and optimize their structure so that they are preserved better at lower bitrate by any subsequent encoder.

“It’s 100 percent codec independent, which means that it is not beholden to any standard or format and can be applied today to any application, platform, or workflow that has to move data quickly and efficiently,” Grce says. “Overall, BitSave improves on multiple quality metrics, and across multiple video encoding standards. We believe we can go further since our approach offers compounded gains to any encoder-specific perceptual quality optimisation.”

Fellow codec innovator V-Nova finds that it is still hard to precisely quantify CO2 output and that profiling the energy usage of different services is challenging.

“For example, services offering a greater volume of content (YouTube) and decoding mostly on mobile devices and tablets have a far greater weight towards datacentre processing and delivery versus the user’s device than services that transmit a lower amount of content to large screen TVs,” says Guido Meardi CEO and co-founder.

Meardi reports that conversations with customers, pressure from investors and customers is pushing sustainability rapidly up the list of priorities for video services; “Ultimately, a service’s sustainability credentials become another point of competitive differentiation.”

V-Nova offers a comprehensive SDK for the deployment of MPEG-5 LCEVC - a new standard which enhances both the compression efficiency (quality) and processing complexity (energy consumption) of existing base codecs like AVC, HEVC, AV1.  “For example, LCEVC-enhanced AVC can cut required bitrates by 50% and required transcoding energy by 60% while maintaining the same quality. For more complex next-gen codecs such as AV1 or VVC, LCEVC still provides compression efficiency benefits, and can decrease transcoding energy consumption by over 3x.

“The other significant energy benefit of LCEVC comes from its native backwards-compatibility. Without LCEVC, the only way to provide better quality and lower bandwidth to new devices is to deliver multiple video workflows.”

Elastic CDN - The infrastructure adjusts to the traffic volume in real-time. AI predicts next-hour traffic load to either boot up new edge servers or shut down existing ones, without impacting QoE.

Smart edge - This reduces the number of video files per title to reduce the infrastructure footprint. Analysis finds the sweet spot between the number of profiles (resolutions, bitrates, formats, etc), the number of variants (A/B watermark), and the number of copies (cache group).

“We expect regulators will set CO2 requirements for streaming providers. Measuring consumption is a first step; quotas for the use of renewables and SLAs that cap energy at the 95th percentile may come.  We also anticipate the launch of streaming services with green credentials for those consumers willing to tolerate lower quality video.”

MainStreaming, another founding partner of the Greening of Streaming organisation, agrees that industry participants are becoming increasingly sophisticated in their understanding of environmental issues and more discerning in their choices.

“With switching costs between streaming services so easy and points of differentiation increasingly slim on a technological level, green issues will increasingly become a point of significant competitive advantage,” says Antonio Corrado, CEO. “From our inception we’ve built consideration of environmental impact directly into the technological choices we make.

“Our technology is geared around minimising power consumption. Our adoption of algorithms to manage adaptive demand and flow and move functions to the Edge where possible doesn’t just serve to make our services more reliable, efficient and effective, but also - by design - it is better for the environment. Indeed, energy consumption with MainStreaming technology is up to 50% lower than standard streaming operations.

“CDN deployments are often sized for peak demand levels, for example to support major live sporting events. If CDN capacity is fixed, this can leave servers idling and generating carbon costs whenever traffic volumes are lower than peak levels. These costs can be readily calculated and used to drive optimisations.”

Sustainability has become a key priority for many of the firm’s clients, especially the largest pay TV providers.

In response, Velocix is evolving all its streaming applications towards hybrid-cloud architectures that feature carbon cost measurement and flexible on-demand scaling. This enables CDN capacity to flex according to consumer demand, explains Brickmeier.

“Resource utilisation scales-up rapidly as audiences grow, and then spins down once the surge is over, thereby minimising the use of compute resources and the associated carbon footprint. Using analytics, operators can also better understand their emissions and seek out strategies to improve.”

Quantifying and tackling the environmental impact of streaming is complex. There are multiple visible and hidden contributors to the global energy consumption in video streaming networks, including devices, CDN servers, head-ends, and networking equipment.

“Networking equipment is agnostic to the type of data it carries,” says Yann Begassat, Business Development Manager at Broadpeak (another Greening of Streaming member). “The only fact we know is that video is the dominant traffic. Virtualization is also a challenge. Multiple applications and network functions will increasingly run on same hardware infrastructures, making it difficult to determine how much energy the CDN is consuming.”

Many players have good intentions and a real ambition, but they lack guidance, best practices, tools, and technologies to react and keep energy consumption under control. “The most energy-efficient technologies for live content distribution are broadcast and multicast, as they don’t require growing network infrastructure and additional power consumption as the number of users increases,” says Begasset. “Broadcast and multicast are used in legacy digital terrestrial television and IPTV networks, but not in internet and HTTP-based managed networks that deliver streaming services.

“Broadpeak is a pioneer in multicast, having introduced nanoCDN, the industry’s first Adaptive Bit Rate (ABR) streaming system that leverages multicast ABR. As the undisputed leader in the field of mABR, Broadpeak is helping service providers reduce their carbon footprint. We estimate that about 70% to 80% energy consumption savings can be achieved in a multicast ABR network during popular live events.”

The video technology industry is already responding to the need for more sustainable streaming. Many companies have embraced important sustainability programmes like the DPP’s Committed to Sustainability scheme and the Science Based Targets plan.

“This momentum is likely to grow as OTT services and pay TV companies increasingly prioritise investment toward vendors that can demonstrate their commitment to the environment and carbon reduction,” says Brickmeier.

For Meardi there needs to be a strong push to deploy technologies “that give at least equal prominence to energy consumption as they do to the delivery of bigger and better viewing experiences. He adds, “Any efficiency intervention takes time and effort: outside of the C-suite, businesses growing at 50% per year may struggle to allocate engineering time to NetZero initiatives, especially when they impact their core workflows. It’s important to clearly empower internal teams with enough time and resources to innovate and make energy efficiency initiatives a real priority.

Beaudouin rightly notes there is no magic use case that alone would solve the climate problem. “Content consumption is a carbon consumer,” he says. “Reducing the environmental footprint of our consumption in this area is one piece of a larger puzzle: a small effort for an individual; a giant one for planet Earth.”

Corrado believes that an improvement in environmental outcomes will be as dependent on a collaborative mindset change as it will be on individual technological developments.

“Making progress as an industry depends on recognising that we can be competitors in a market without making it a zero-sum game - sharing values, innovations and techniques which benefit us all - while holding each other to account as a result.”