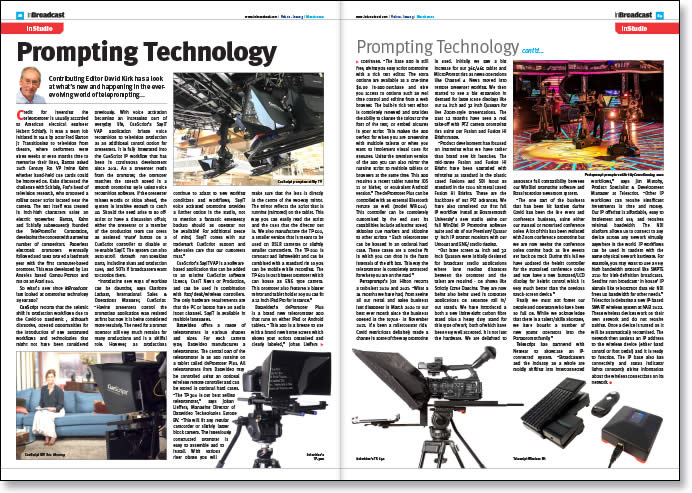 Contributing Editor David Kirk has a look at what’s new and happening in the ever-evolving world of teleprompting...

Credit for inventing the teleprompter is usually accorded to American electrical engineer Hubert Schlafly. It was a team job initiated in 1948 by actor Fred Barton Jr. Transitioning to television from theatre, where performers were given weeks or even months time to memorise their lines, Barton asked 20th Century Fox VP Irving Kahn whether hand-held cue cards could be improved on. Kahn discussed the challenge with Schlafly, Fox’s head of television research, who proposed a rolling paper script located near the camera. The text itself was created in inch-high characters using an electric typewriter. Barton, Kahn and Schlafly subsequently founded the TelePrompTer Corporation, developing the concept with a growing number of competitors. Paperless electronic prompters eventually followed and 1982 proved a landmark year with the first computer-based prompter. This was developed by Los Angeles based Compu-Prompt and ran on an Atari 800.

So what’s new since InBroadcast last looked at prompting technology a year ago?

CueScript reports that the seismic shift in production workflows due to the Covid-19 pandemic , although disruptive, opened opportunities for the introduction of new automated workflows and technologies that might not have been considered previously. With voice activation becoming an increasing part of everyday life, CueScript’s SayiT VAP application brings voice recognition to television production as an additional control option for presenters. It is fully integrated into the CueScript IP workflow that has been in continuous development since 2014. As a presenter reads from the prompter, the prompter matches the speech speed in a smooth prompting style using voice recognition software. If the presenter misses words or skips ahead, the system is intuitive enough to catch up. Should the need arise to go off-script or have a discussion off-air, either the presenter or a member of the production team can press an assigned ‘mute’ button on a CueScript controller to disable or re-enable SayiT. The system can also auto-scroll through non-speaking parts, including slugs and production cues, and SOTs if broadcasters want to caption them.

“Introducing new ways of working can be daunting, says Charlotte Latham, International Sales & Operations Manager, CueScript. “Having presenters control the prompting application was resisted at first but now it is being considered more regularly. The need for a prompt operator still very much remains for many productions and is a skillful role. However, as productions continue to adapt to new working conditions and workflows, SayiT voice activated prompting provides a further option in the studio, not to mention a fantastic emergency backup should an operator not be available! For additional peace of mind, SayiT comes with our trademark CueScript support and after-sales care that our customers trust.” CueScript’s SayiT VAP is a software-based application that can be added to an existing CueScript software licence, CueiT News or Production, and can be used in combination with foot/desk/wireless controllers. The only hardware requirements are that the PC or laptop have an audio input channel. SayiT is available in multiple languages.

Datavideo offers a range of teleprompters in various shapes and sizes. For each camera type, Datavideo manufactures a teleprompter. The central part of the teleprompter is an app running on a tablet called dvPrompter Plus. All teleprompters from Datavideo may be controlled using an optional wireless remote controller and can be stored in optional hard cases. “The TP-300 is our best selling teleprompter,” says Johan Lieffers, Managing Director of Datavideo Technologies Europe BV. “This will fit any regular camcorder or slightly larger block camera. The ingeniously constructed prompter is easy to assemble and to install. With various riser plates you will make sure that the lens is directly in the centre of the two-way mirror. The mirror reflects the script that is running (mirrored) on the tablet. This way you can easily read the script and the cues that the director put in. We also manufacture the TP-500, a smaller version that is meant to be used on DSLR cameras or slightly smaller camcorders. The TP-500 is compact and lightweight and can be combined with a standard rig so you can be mobile while recording. The TP-650 is our biggest prompter which can house an ENG type camera. This prompter also features a bigger mirror and tablet holder so you can fit a 12 inch iPad Pro for instance.”

Datavideo’s dvPrompter Plus is a brand new teleprompter app that runs on either iPad or Android tablets. “This app is a breeze to use with a brand-new home screen which shows your scripts organised and clearly labeled,” Johan Lieffers continues. “The base app is still free, giving you easy script prompting with a rich text editor. The extra options are available as a one-time $9.99 in-app-purchase and give you access to options such as real time control and editing from a web browser. The built-in rich text editor is completely renewed and provides the ability to change the colour or the font of the text, or embed pictures in your script. This makes the app perfect for when you are presenting with multiple talents or when you want to implement visual cues for gestures. Using the premium version of the app you can also mirror the running script to multiple tablets or browsers at the same time. This app requires a recent tablet running iOS 11 or higher, or equivalent Android version.” The dvPrompter Plus can be controlled with an external Bluetooth remote as well (model WR-500). This controller can be completely customised by the end user. Its capabilities include adjusting speed, skipping cue markers and skipping to other scripts. “Each teleprompter can be housed in an optional hard case. These cases are a precise fit in which you can drop in the foam internals of the gift box. This way the teleprompter is completely protected for when you are on the road.”

Portaprompt’s Jon Hilton reports a turbulent 2020 and 2021: “What a 24 months we have had, from seeing all our rental and sales business just disappear in March 2020 to our best ever month since the business opened in the 1970s - in November 2021. It’s been a rollercoaster ride. Covid restrictions definitely made a change in some of the way prompting is used. Initially we saw a big increase for our 365/465 tablet and MicroPrompt rigs as news operations like Channel 4 News moved into remote presenter working. We then started to see a big expansion in demand for large scene displays like our 24 inch and 32 inch Quasars for live Zoom-style presentations. The past 12 months have seen a real take-off with PTZ camera prompting rigs using our Fusion and Fusion Hi Bright range.

“Product development has focused on improving what we have rather than brand new kit launches. The mid-range Fusion and Fusion Hi Bright have been upgraded with mirroring as standard in the plastic cased Fusions and SDI input as standard in the 1200 nit metal-cased Fusion Hi Brights. These are the backbone of our PTZ advances. We have also completed our first full IP workflow install at Bournemouth University’s new studio using our full WinDigi IP Prompting software suite and six of our Premium/Quasar 17 inch IP prompt monitors with our Umount and ENG/studio rigging.

“Our large screen 24 inch and 32 inch Quasars were initially designed for broadcast studio applications where long reading distances between the prompter and the talent are required - on shows like Strictly Come Dancing. They are now being also being used in corporate applications on separate roll in/out stands. We have introduced a both a new lightweight carbon fibre stand plus a heavy duty stand for this type of work, both of which have been very well accepted. It is not just the hardware. We are delighted to announce full compatibility between our WinDigi prompting software and Ross Inception newsroom system.

Finally we must not forget our people and operators who have been so full on. While we acknowledge that there is a talent/skills shortage, we have bought a number of new young operators into the Portaprompt family.”

Telescript has partnered with Netgear to showcase an IP-connected system. “Broadcasters and the industry as a whole are rapidly shifting into interconnected workflows,” says Jim Murphy, Product Specialist & Development Manager at Telescript. “Other IP workflows can require significant investments in time and money. Our IP offering is affordable, easy to implement and use, and requires minimal bandwidth. The NDI platform allows us to connect to any device across any network virtually anywhere in the world. IP workflows can be used in tandem with the same physical network hardware. For example, you may want to use a very high bandwidth protocol like SMPTE 2110 for high-definition broadcasts.

Sending non-broadcast ‘in-house’ IP signals like teleprompt data via NDI frees up bandwidth for other needs.” Telescript is debuting a new IP-based SMART wireless system at NAB 2022.  These wireless devices work on their own network and do not require pairing. Once a device is turned on it will be automatically recognised. The network then assigns an IP address to the wireless device (either hand control or foot pedal) and it is ready to function. The IP base also has connectivity and status indicator lights constantly giving information about the wireless connections on its network.