Optimization for cost and remote efficiency 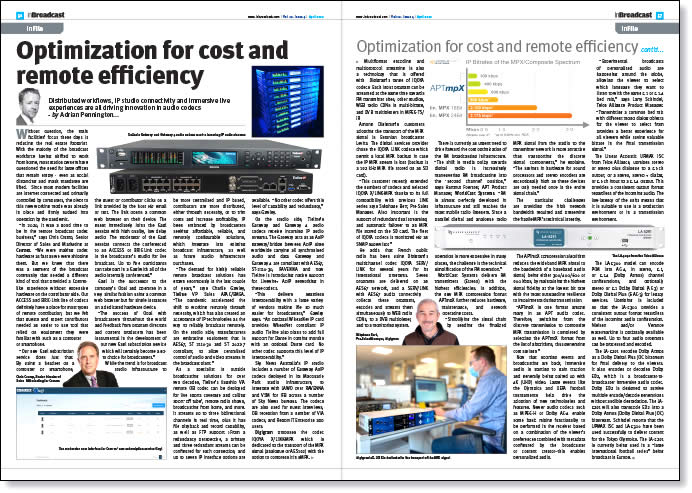 Without question, the main facilities’ focus these days is reducing the real estate footprint. With the majority of the broadcast workforce having shifted to work from home, most station owners have questioned the need for large offices that remain empty - even as social distancing and mask mandates are lifted.  Since most modern facilities are internet connected and primarily controlled by computers, the pivot to this new working mode was already in place and firmly nudged into operation by the pandemic.

“In 2020, it was a good time to be in the remote broadcast codec business,” says Chris Crump, Senior Director of Sales and Marketing at Comrex. “We were making codec hardware as fast as we were shipping them. But we knew that there was a segment of the broadcast community that needed a different kind of tool that provided a Comrex-like experience without expensive hardware on the contributor side. Our ACCESS and BRIC-Link line of codecs definitely have a place for most types of remote contribution, but we felt that guests and expert contributors needed an easier to use tool that relied on equipment they were familiar with such as a computer or smartphone.

“Our new Gagl subscription service does just that. By using a headset on a computer or smartphone, the guest or contributor clicks on a link provided by the host via email or text. The link opens a common web browser on their device. The guest immediately joins the Gagl session with high quality, low delay audio. The moderator of the Gagl session connects the conferenced to an ACCESS or BRIC-Link codec in the broadcaster’s studio for live broadcast. Up to five participants can take part in a Gagl with all of the audio internally conferenced.”

Gagl is the successor to the company’s Opal and operates in a very similar fashion using a common web browser but for single instances on a dedicated hardware device.

“The success of Opal with broadcasters throughout the world and feedback from program directors and content producers has been instrumental in the development of our new Gagl subscription service which will certainly become a go-to choice for broadcasters.”

While the trend is for broadcast studio infrastructure to be more centralised and IP based, contributors are more distributed, either through necessity, or to trim costs and increase profitability. IP been embraced by broadcasters seeking affordable, reliable, and remotely configurable solutions, which integrate into existing broadcast infrastructure, as well as future studio infrastructure purchases.

“The demand for highly reliable remote broadcast solutions has grown enormously in the last couple of years,” says Charlie Gawley, Tieline VP Sales APAC/EMEA. “The pandemic accelerated the shift to working remotely through necessity, which has also created an acceptance of IP technologies as the way to reliably broadcast remotely. On the studio side, manufacturers are embracing equipment that is AES67, ST 2110-30 and ST 2022-7 compliant, to allow centralised control of audio and video streams in the broadcast plant.”

As a specialist in outside broadcasting solutions for over two decades, Tieline’s flagship ViA remote OB codec can be deployed for live sports coverage and calling sport ‘off tube’, remote radio shows, broadcasting from home, and more. It streams up to three bidirectional channels in real time, plus it has file playback and record capability, as well as FTP support. >From a redundancy perspective, a primary and three redundant streams can be configured for each connection, and up to seven IP interface options are available.  “No other codec offers this level of capability and redundancy,” says Gawley.

On the studio side, Tieline’s Gateway and Gateway 4 audio codecs receive incoming IP audio streams. The Gateway acts as an AoIP gateway/bridge between AoIP sites worldwide carrying all synchronised audio and data. Gateway and Gateway 4 are compliant with AES67, ST-2110-30, RAVENNA and now Tieline is introducing native support for Livewire+ AoIP networking in these codecs.

“This delivers seamless interoperability with a large variety of vendors making life so much easier for broadcasters,” Gawley says. “An optional WheatNet-IP card provides WheatNet compliant IP audio. Tieline also plans to add full support for Dante in coming months with an optional Dante card. No other codec supports this level of IP interoperability.”

Sky News Australia’s IP studio includes a number of Gateway AoIP codecs deployed in its Macquarie Park studio infrastructure, to integrate with LAWO over RAVENNA and VSM for IFB across a number of Sky News bureaus. The codecs are also used for guest interviews, OB reception from a number of ViA codecs, and Report-IT Enterprise app users.

Digigram proposes the codec IQOYA X/LINK-MPX which is dedicated to the transport of the MPX signal (analogue or AES192) with the option to compress it in µMPX.

Multiformat encoding and multiprotocol streaming is also a technology that is offered with  Digigram’s range of IQOYA codecs. Each input program can be streamed at the same time towards FM transmitter sites, other studios, WEB radio CDNs in multi-bitrate, and DVB multiplexers in MPEG-TS/IP.

Among Digigram’s customers adopting the transport of the MPX signal is Estonian broadcaster Levira. The digital services provider chose the IQOYA LINK codecs which permit a local MPX backup in case the IP MPX stream is lost (backup is a 192 kHz MPX file stored on an SD card).

“This customer recently extended the numbers of codecs and selected IQOYA X/LINK-MPX thanks to its full compatibility with previous LINK series says Stéphane Bert, Pre-Sales Manager. Also important is the support of redundant dual streaming, and automatic failover to an MPX file stored on the SD card. The fleet of IQOYA codecs is monitored via an SNMP supervisor.”

He adds that French public radio has been using Digigram’s multichannel codec IQOYA SERV/LINK for several years for its international programs. Seven programs are delivered on an AES67 network, and a SERV/LINK with AES67 audio connectivity collects these programs, encodes and streams them simultaneously to WEB radio CDNs, to a DVB multiplexer, and to a monitoring system.

There is currently an urgent need to drive forward the cost optimization of the FM broadcasting infrastructure. “The shift in media policy towards digital radio is increasingly maneuvering FM broadcasting into the ‘second channel’ position,” says Hartmut Foerster, APT Product Manager, WorldCast Systems. “FM is almost perfectly developed in infrastructure and still reaches the most mobile radio listeners. Since a parallel digital and analogue radio operation is more expensive in many places, the challenge is the technical simplification of the FM operation.”

“Simplifying the signal chain by sending the finalized MPX signal from the studio to the transmitter network is more attractive than transporting the discrete signal  components,” he explains. “The savings in hardware for sound processors and stereo encoders are exceptionally high as these devices are only needed once in the entire signal chain.”

The APTmpX compression algorithm reduces the wideband MPX signal to the bandwidth of a baseband audio signal, being either 300/400/600 or 900 kbps, by maintaining the highest signal fidelity at the lowest bit rate with the most outstanding resilience to impairments during transmission.

“APTmpX is one format among many in an APT audio codec. Therefore, switching from the discrete transmission to composite MPX transmission is completed by selecting the APTmpX format from the list of algorithms, thus generating cost savings.”

Now that sporting events and broadcasting are back, immersive audio is starting to gain traction and generally being paired up with 4K (UHD) video. Large events like the Olympics and UEFA football tournaments help drive the adoption of new technologies and features. Newer audio codecs such as MPEG-H or Dolby AC-4 enable some basic mixing functionality to be performed in the receiver based on a combination of the viewer’s preferences combined with metadata configured by the broadcaster or content creator–this enables personalized audio.

“Experimental broadcasts of personalised audio are happening around the globe, allowing the viewer to select which language they want to listen to with the same 5.1 or 5.1.4 bed mix,” says Larry Schindel, Telos Alliance Product Manager.

“Transmitting a common bed mix with different mono dialog objects for the viewer to select from provides a better experience for all viewers while saving valuable bitrate in the final transmission signal.”

The Linear Acoustic UPMAX ISC from Telos Alliance, upmixes stereo or stereo plus dialogue to a 5.1-ch output, or a stereo, stereo + dialog, or 5.1-ch input to a 5.1.4 output. This provides a consistent output format regardless of the incoming audio. The low-latency of the units means that it is suitable to use in a production environment or in a transmission environment.

The LA-5300 model can encode PCM into AC-4, in stereo, 5.1, or 5.1.4 (Dolby Atmos) channel configurations, and optionally stereo or 5.1 Dolby Digital (AC-3) or Dolby Digital Plus (E-AC-3) for legacy services. Upmixing is included so that the LA-5300 provides a consistent output format regardless of the incoming audio configuration. Nielsen and/or Verance watermarking is optionally available as well. Up to four audio programs can be processed and encoded.

The LA-5291 encodes Dolby Atmos as a Dolby Digital Plus JOC bitstream for final delivery to the viewers. It also encodes or decodes Dolby ED2, which is a broadcaster-to-broadcaster immersive audio codec. Dolby ED2 is designed to survive multiple encode/decode generations without audible degradation. The LA-5291 will also transcode ED2 into a Dolby Atmos (Dolby Digital Plus JOC) bitstream. Schindel reports that the UPMAX ISC and LA-5300 have been used successfully to deliver content for the Tokyo Olympics. The LA-5291 is currently being used in a “large international football series” being broadcast in Europe.