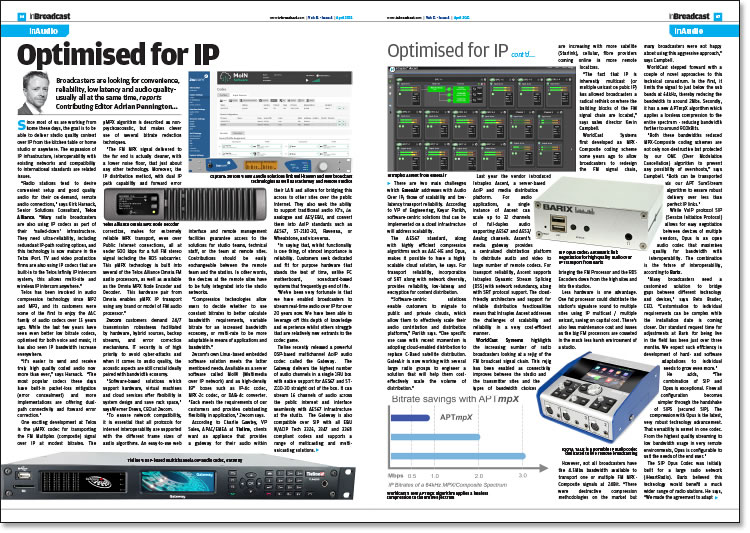 Since most of us are working from home these days, the goal is to be able to deliver studio quality content over IP from the kitchen table or home studio or anywhere. The expansion of IP infrastructure, interoperability with existing networks and compatibility to international standards are related issues.

Telos has been involved in audio compression technology since MP2 and MP3, and its customers were some of the first to enjoy the AAC family of audio codecs over 15 years ago. While the last few years have seen even better low bitrate codecs, optimised for both voice and music, it has also seen IP bandwidth increase everywhere.

One exciting development at Telos is the µMPX codec for transporting the FM Multiplex (composite) signal over IP at modest bitrates. The µMPX algorithm is described as non-psychoacoustic, but makes clever use of several bitrate reduction techniques. “The FM MPX signal delivered to the far end is actually cleaner, with a lower noise floor, that just about any other technology. Moreover, the IP distribution method, with dual IP path capability and forward error correction, makes for extremely reliable MPX transport, even over Public Internet connections, all at under 500 kbps for a full FM stereo signal including the RDS subcarrier. This µMPX technology is built into several of the Telos Alliance Omnia FM audio processors, as well as available as the Omnia MPX Node Encoder and Decoder.  This hardware pair from Omnia enables µMPX IP transport using any brand or model of FM audio processor.”

2wcom customers demand 24/7 transmission robustness facilitated by hardware, hybrid sources, backup streams, and error correction mechanisms. IT security is of high priority to avoid cyber-attacks and when it comes to audio quality, the acoustic aspects are still crucial ideally paired with bandwidth economy.

“To ensure network compatibility, it is essential that all protocols for internet interoperability are supported with the different frame sizes of audio algorithms. An easy-to-use web interface and remote management facilities guarantee access to the solutions for studio teams, technical staff, or the team at remote sites. Contributions should be easily exchangeable between the remote team and the studios. In other words, the devices at the remote sites have to be fully integrated into the studio networks. “Compression technologies allow users to decide whether to use constant bitrates to better calculate bandwidth requirements, variable bitrate for an increased bandwidth economy, or multi-rate to be more adaptable in means of applications and bandwidth.” 2wcom’s own Linux-based embedded software solution meets the latter mentioned needs. Available as a server software called MoIN (Multimedia over IP network) and as high-density 19’’ boxes such as IP-4c codec, MPX-2c codec, or DAB-4c converter. “Each meets the requirements of our customers and provides outstanding flexibility in application,” 2wcom says.

According to Charlie Gawley, VP Sales, APAC/EMEA at Tieline, clients want an appliance that provides a gateway for their audio within their LAN and allows for bridging this across to other sites over the public Internet. They also seek the ability to support traditional audio IO’s, i.e. analogue and AES/EBU, and convert them into AoIP standards such as AES67, ST-2110-30, Ravenna, or Wheatstone, and vice versa.

“In saying that, whilst functionality is one thing, of utmost importance is reliability. Customers seek dedicated and fit for purpose hardware that stands the test of time, unlike PC motherboard, soundcard-based systems that frequently go end of life. “We’ve been very fortunate in that we have enabled broadcasters to stream real-time audio over IP for over 20 years now. We have been able to leverage off this depth of knowledge and experience whilst others struggle that are relatively new entrants to the codec game.

Tieline recently released a powerful DSP-based multichannel AoIP audio codec called the Gateway.  The Gateway delivers the highest number of audio channels in a single 1RU box with native support for AES67 and ST-2110-30 straight out of the box. It can stream 16 channels of audio across the public internet and interface seamlessly with AES67 infrastructure at the studio.  The Gateway is also compatible over SIP with all EBU N/ACIP Tech 3326, 3347 and 3368 compliant codecs and supports a range of multicasting and multi-unicasting solutions.

There are two main challenges which GatesAir addresses with Audio Over IP; those of scalability and low-latency transport reliability.  According to VP of Engineering, Keyur Parikh, software-centric solutions that can be implemented on a cloud infrastructure will address scalability.

The AES67 standard, along with highly efficient compression algorithms such as AAC-HE and Opus, makes it possible to have a highly scalable cloud solution, he says. For transport reliability, incorporation of SRT along with network diversity, provides reliability, low-latency and encryption for content distribution.

WorldCast Systems highlights the increasing number of radio broadcasters looking at a rejig of the FM broadcast signal chain. This rejig has been enabled as connectivity improves between the studio and the transmitter sites and the types of bandwidth choices are increasing with more satellite (Starlink), cellular, fibre providers coming online in more remote locations.

“The fact that IP is inherently multicast (or multiple unicast on pubic IP) has allowed broadcasters a radical rethink on where the building blocks of the FM signal chain are located,” says sales director Kevin Campbell.

WorldCast Systems first developed an MPX-Composite coding scheme some years ago to allow broadcasters to redesign the FM signal chain, bringing the FM Processor and the RDS Encoders down from the high sites and into the studios.

Less hardware is one advantage. One fat processor could distribute the station’s signature sound to multiple sites using IP multicast / multiple unicast, saving on capital cost. There’s also less maintenance cost and issues as the big FM processors are cosseted in the much less harsh environment of a studio.

However, not all broadcasters have the 4.5Mbs bandwidth available to transport one or multiple FM MPX-Composite signals at 24Bit. “There were destructive compression methodologies on the market but many broadcasters were not happy about using this aggressive approach,” says Campbell.

WorldCast stepped forward with a couple of novel approaches to this technical conundrum. In the first, it limits the signal to just below the sub bands at 64kHz, thereby reducing the bandwidth to around 2Mbs. Secondly, it has a new APTmpX algorithm which applies a lossless compression to the entire spectrum - reducing bandwidth further to around 900kBits.

“Both these bandwidths reduced MPX-Composite coding schemes are not only non-destructive but protected by our OMC (Over Modulation Cancellation) algorithm to prevent any possibility of overshoots,” says Campbell. “Both can be transported via our APT SureStream algorithm to ensure robust delivery over less than perfect IP links.”

While VoIP protocol SIP (Session Initiation Protocol) allows for easy negotiation between devices of multiple vendors, Opus is an open audio codec that maximises quality for bandwidth with interoperability. The combination is the future of interoperability, according to Barix.

“Many broadcasters need a customized solution to bridge gaps between different technology and devices,” says Reto Brader, CEO. “Customisation to individual requirements can be complex while the installation date is coming closer. Our standard request time for adjustments at Barix for being live in the field has been just over three months. We expect such efficiency in development of hard- and software adaptations to individual needs to grow even more.”

He adds, “The combination of SIP and Opus is exceptional. Firewall configuration becomes simpler through the handshake of SIPS (secured SIP). The compression with Opus is the latest, very robust technology advancement. That versatility is unmet in one codec. From the highest quality streaming to low bandwidth usage in very remote environments, Opus is configurable to suit the needs of the end user.”

The SIP Opus Codec was initially built for a large radio network (iHeartRadio). Barix believed this technology would benefit a much wider range of radio stations. He says, “We made the agreement to adapt the customized product for being used in a more general way. By mass producing the device allowed broadcasters to profit from the initial investment and a very solid device.”

While radios already offered several simultaneous audio programs, Digigram chose to propose a codec with high channel density in only 1U. This codec had to manage talk-back channels and commentaries via IP. It had to support remote broadcasting of programs between remote studios and generate multiple WEB radio streams for CDNs. This led to the creation of IQOYASERV/LINK, codec which formed the basis for many of its subsequent products.

IQOYA TALK, for example, is a portable IP audio codec dedicated to live remote broadcasting for radio and TV. Designed with an intuitive user-interface as simple as a smartphone, IQOYA TALK allows remote reporters to perform all the key actions in just two clicks. Live reporting or commentary can be performed, as well as studio quality interviews for up to four journalists and guests. Audio content is streamed through a large number of wired or wireless ‘last mile’ connections.

While algorithms like AAC and Opus have proven to be superb for delivering high quality audio at impressively low bit rates, that is really only half the battle when it comes to reliable delivery of audio over challenging data networks like the public Internet.

“Not everyone has the luxury of being able to utilize a private IP data network like MPLS but most are using the public Internet for delivery,” says Chris Crump, Director of Sales & Marketing, Comrex Corporation. “The incredible demand on bandwidth currently has made the already contentious public Internet even more prone to outages and diminished availability. So, it’s even more important to be able to utilize complex reliability tools to ensure transmission of data even on compromised networks.”

“This has worked exceptionally well for the higher bit rates required for video,” Crump says. “When applied to audio only transmission with average bit rates in the 96 to 128kbps range, the result is flawless transmission of audio. Our Comrex ACCESS and BRIC-Link II audio codecs have benefited greatly from this advanced technology and have become the ‘go-to’ choice for some of the world’s most important broadcasters.”