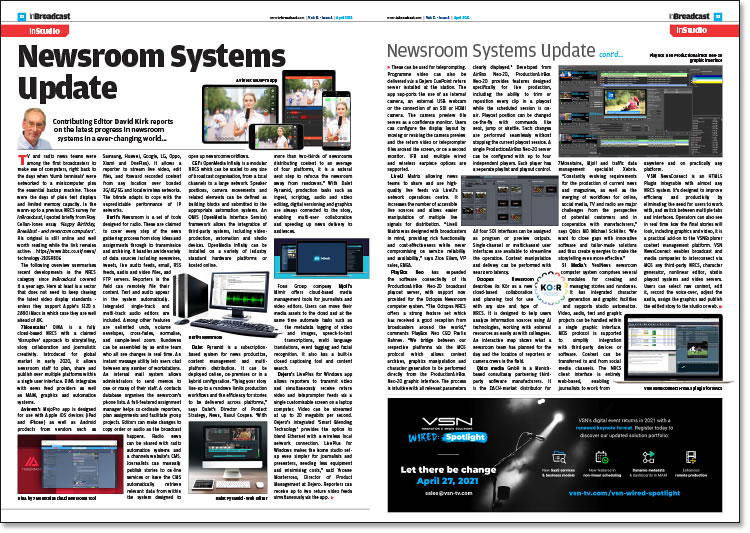 TV and radio news teams were among the first broadcasters to make use of computers, right back to the days when ‘dumb terminals’ were networked to a minicomputer plus the essential backup machine. Those were the days of plain text displays and limited memory capacity. In the warm-up to a previous NRCS survey for InBroadcast, I quoted briefly from Rory Cellan-Jones essay ‘Happy Birthday, Breakfast - and newsroom computers’. His original is still online and well worth reading while the link remains active: https://www.bbc.co.uk/news/technology-21059806

The following overview summarises recent developments in the NRCS category since InBroadcast covered it a year ago. Here at least is a sector that does not need to keep chasing the latest video display standards - unless they support Apple’s 5120 x 2880 iMacs in which case they are well ahead of 4K.

7Mountains’ DiNA is a fully cloud-based NRCS with a claimed ‘disruptive’ approach to storytelling, story collaboration and journalistic creativity. Introduced for global market in early 2020, it allows newsroom staff to plan, share and publish over multiple platforms within a single user interface. DiNA integrates with news feed providers as well as MAM, graphics and automation systems.

Aviwest’s MojoPro app is designed for use with Apple iOS devices (iPad and iPhone) as well as Android products from vendors such as Samsung, Huawei, Google, LG, Oppo, Xiami and OnePlus). It allows a reporter to stream live video, edit files, and forward recorded content from any location over bonded 3G/4G/5G and local wireless networks. The bitrate adapts to cope with the unpredictable performance of IP networks.

Burli’s Newsroom is a set of tools designed for radio. These are claimed to cover every step of the news gathering process from story ideas and assignments through to transmission and archiving. It handles a wide variety of data sources including newswires, tweets, live audio feeds, email, RSS feeds, audio and video files, and FTP servers. Reporters in the field can remotely file their content. Text and audio appear in the system automatically. Integrated single-track and multi-track audio editors are included. Among other features are unlimited undo, volume envelopes, cross-fades, normalise, and sample-level zoom. Rundowns can be assembled by an entire team who all see changes in real time. An instant message utility lets users chat between any number of workstations. An internal mail system allows administrators to send memos to one or many of their staff. A contacts database organises the newsroom’s phone lists. A full-featured assignment manager helps co-ordinate reporters, plan assignments and facilitate group projects. Editors can make changes to copy order or audio as the broadcast happens. Radio news can be shared with radio automation systems and a channels website’s CMS. Journalists can manually publish stories to on-line services or have the CMS automatically retrieve relevant data from within the system designed to open up newsroom workflows.

CGI’s OpenMedia Infinity is a modular NRCS which can be scaled to any size of broadcast organisation, from a local channels to a large network. Speaker positions, camera movements and related elements can be defined as building blocks and submitted to the appropriate automation systems. An OMIS (OpenMedia Interface Service) framework allows the integration of third-party systems, including video-production, automation and studio devices. OpenMedia Infinity can be installed on a variety of industry standard hardware platforms or hosted online.

Dalet Pyramid is a subscription-based system for news production, content management and multi-platform distribution. It can be deployed online, on-premises or in a hybrid configuration. “Tying your story line-up to a rundown limits production workflows and the efficiency for stories to be delivered across platforms,” says Dalet’s Director of Product Strategy, News, Raoul Cospen. “With more than two-thirds of newsrooms distributing content to an average of four platforms, it is a natural next step to refocus the newsroom away from rundowns.” With Dalet Pyramid, production tasks such as ingest, scripting, audio and video editing, digital versioning and graphics are always connected to the story, enabling multi-user collaboration and speeding up news delivery to audiences.

Fonn Group company Mjoll’s Mimir offers cloud-based media management tools for journalists and video editors. Users can move their media assets to the cloud and at the same time automate tasks such as the metadata logging of video and images, speech-to-text transcriptions, multi language translations, event tagging and facial recognition. It also has a built-in closed captioning tool and content search.

Dejero’s LivePlus for Windows app allows reporters to transmit video and simultaneously receive return video and teleprompter feeds via a single customisable screen on a laptop computer. Video can be streamed at up to 20 megabits per second. Dejero’s integrated ‘Smart Blending Technology’ provides the option to blend Ethernet with a wireless local network connection. LivePlus for Windows makes the home studio set-up even simpler for journalists and presenters, needing less equipment and minimising costs,” said Yvonne Monterroso, Director of Product Management at Dejero. Reporters can receive up to two return video feeds simultaneously via the app.

These can be used for teleprompting. Programme video can also be delivered via a Dejero CuePoint return server installed at the station. The app sup-ports the use of an internal camera, an external USB webcam or the connection of an SDI or HDMI camera. The camera preview tile serves as a confidence monitor. Users can configure the display layout by moving or resizing the camera preview and the return video or teleprompter tiles around the screen, or on a second monitor. IFB and multiple wired and wireless earpiece options are supported.

PlayBox Neo has expanded the software connectivity of its ProductionAirBox Neo-20 broadcast playout server, with support now provided for the Octopus Newsroom computer system. “The Octopus NRCS offers a strong feature set which has received a good reception from broadcasters around the world,” comments PlayBox Neo CEO Pavlin Rahnev. “We bridge between our respective platforms via the MOS protocol which allows content archives, graphics manipulation and character generation to be performed directly from the ProductionAirBox Neo-20 graphic interface. The process is intuitive with all relevant parameters clearly displayed.” Developed from AirBox Neo-20, ProductionAirBox Neo-20 provides features designed specifically for live production, including the ability to trim or reposition every clip in a playout while the scheduled session is on-air. Playout position can be changed on-the-fly with commands like next, jump or shuttle. Such changes are performed seamlessly without stopping the current playout session. A single ProductionAirBox Neo-20 server can be configured with up to four independent players. Each player has a separate playlist and playout control. All four SDI interfaces can be assigned as program or preview outputs. Single-channel or multichannel user interfaces are available to streamline the operation. Content manipulation and delivery can be performed with near-zero latency.

Octopus Newsroom describes its Kör as a new cloud-based collaboration and planning tool for use with any size and type of NRCS. It is designed to help users analyze information sources using AI technologies, working with external resources as easily as with colleagues. An interactive map shows what a newsroom team has planned for the day and the location of reporters or camera crews in the field.

Qbics media GmbH is a Munich-based consultancy partnering third-party software manufacturers. It is the DACH-market distributor for 7Mountains, Mjoll and traffic data management specialist Xebris. “Constantly evolving requirements for the production of current news and magazines, as well as the merging of workflows for online, social media, TV and radio are major challenges from the perspective of potential customers and in cooperation with manufacturers,” says Qbics MD Michael Schüller. “We want to close gaps with innovative software and tailor-made solutions and thus create synergies to make the storytelling even more effective.”

SI Media’s Yes!News newsroom computer system comprises several modules for creating and managing stories and rundowns. It has integrated character generation and graphic facilities and supports studio automation. Video, audio, text and graphic projects can be handled within a single graphic interface. MOS protocol is supported to simplify integration with third-party devices or software. Content can be transferred to and from social media channels. The NRCS client interface is entirely web-based, enabling journalists to work from anywhere and on practically any platform.

VSN NewsConnect is an HTML5 Plugin integrable with almost any NRCS system. It’s designed to improve efficiency and productivity by eliminating the need for users to work with, and switch between multiple tabs and interfaces. Operators can also see in real time how the final stories will look, including graphics and video, it is a practical add-on to the VSNExplorer content management platform. VSN NewsConnect enables broadcast and media companies to interconnect via MOS any third-party NRCS, character generator, nonlinear editor, studio playout systems and video servers. Users can select raw content, edit it, record the voice-over, adjust the audio, assign the graphics and publish the edited story to the studio or web.