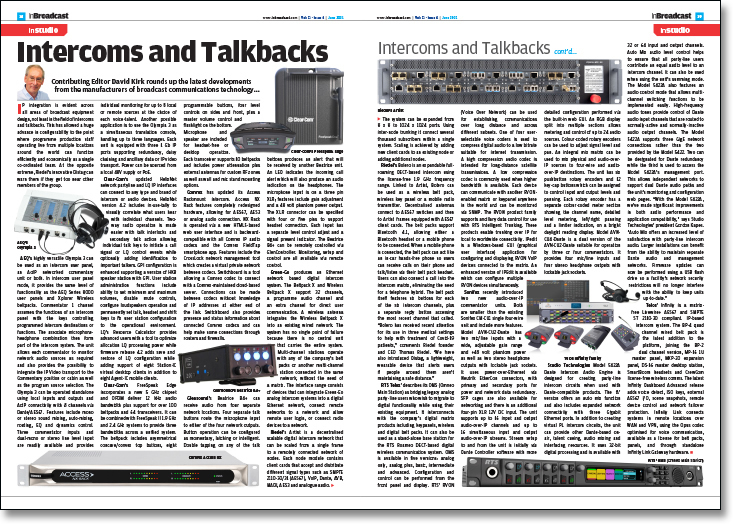 IP integration is evident across all areas of broadcast equipment design, not least in the field of intercoms and talkbacks. This has allowed a huge advance in configurability to the point where programme production staff operating live from multiple locations around the world can function efficiently and economically as a single co-ordinated team. At the opposite extreme, Riedel’s innovative Distag can warn them if they get too near other members of the group.

AEQ’s highly versatile Olympia 3 can be used as an intercom user panel, an AoIP networked commentary unit or both. In intercom user panel mode, it provides the same level of functionality as the AEQ Series 8000 user panels and Xplorer Wireless beltpacks. Commentator 1 channel assumes the functions of an intercom panel with the keys controlling programmed intercom destinations or functions. The associate microphone-headphone combination then form part of the intercom system. The unit allows each commentator to monitor network audio sources as required and also provides the possibility to integrate the IP Video transport to the Commentary position or cabin as well as the program source selection. The Olympia 3 can be operated standalone using local inputs and outputs and AoIP connectivity with 8 channels via Dante/AES67. Features include mono or stereo sound mixing, auto-mixing, routing, EQ and dynamics control. Three commentator inputs and dual-mono or stereo line level input are readily available and provides individual monitoring for up to 8 local or remote sources at the choice of each voice-talent.

Another possible application is to use the Olympia 3 as a simultaneous translation console, handling up to three languages. Each unit is equipped with three 1 Gb IP ports supporting redundancy, daisy chaining and ancillary data or IP video transport. Power can be sourced from a local 48V supply or PoE.

Clear-Com’s FreeSpeak Edge incorporates a new 5 GHz chipset and OFDM deliver 12 kHz audio bandwidth plus support for over 100 beltpacks and 64 transceivers. It can be combined with FreeSpeak II 1.9 GHz and 2.4 GHz systems to provide three bandwidths across a unified system. The beltpack includes asymmetrical concave/convex top buttons, eight programmable buttons, four level controls on sides and front, plus a master volume control and flashlight on the bottom. Microphone and speaker are included for headset-free or desktop operation. Each transceiver supports 10 beltpacks and includes power attenuation plus external antennas for custom RF zones as well as wall and mic stand mounting options.

Comrex has updated its Access Rackmount intercom. Access NX Rack features completely redesigned hardware, allowing for AES67, AES3 or analog audio connection. NX Rack is operated via a new HTML5-based web user interface and is backward-compatible with all Comrex IP audio codecs and the Comrex FieldTap smartphone app. Features include the CrossLock network management tool which creates a virtual private network between codecs. Switchboard is a tool allowing a Comrex codec to connect with a Comrex-maintained cloud-based server. Connections can be made between codecs without knowledge of IP addresses at either end of the link. Switchboard also provides presence and status information about connected Comrex codecs and can help make some connections through routers and firewalls.

Glensound’s Beatrice B4+ can receive audio from four separate network locations. Four separate talk buttons route the microphone input to either of the four network outputs. Button operation can be configured as momentary, latching or intelligent. Double tapping on any of the talk buttons produces an alert that will be received by another Beatrice unit. An LED indicates the incoming call alert which will also produce an audio indication on the headphones. The microphone input is on a three pin XLR; features include gain adjustment and a 48 volt phantom power output. The XLR connector can be specified with four or five pins to support headset connection.

Each input has a separate level control adjust and a signal present indicator. The Beatrice B4+ can be remotely controlled via GlenController. Monitoring, setup and control are all available via remote control.

Green-Go produces an Ethernet network based digital intercom system. The Beltpack X and Wireless Beltpack X support 32 channels, a programme audio channel and an extra channel for direct user communication. A wireless antenna integrates the Wireless Beltpack X into an existing wired network. The system has no single point of failure because there is no central unit that carries the entire system. Multi-channel stations operate with any of the company’s belt packs or another multi-channel station connected in the same network, without the need of a matrix. The interface range consists of devices that can integrate Green-Go analog intercom systems into a digital Ethernet network, connect remote networks to a network and allow remote user login, or connect radio devices to a network.

Riedel’s Artist is a decentralised scalable digital intercom network that can be scaled from a single frame to a remotely connected network of nodes. Each node module contains client cards that accept and distribute different signal types such as SMPTE 2110-30/31 (AES67), VoIP, Dante, AVB, MADI, AES3 and analogue audio.

The system can be expanded from 8 x 8 to 1024 x 1024 ports. Using inter-node trunking it connect several thousand subscribers within a single system. Scaling is achieved by adding new client cards to an existing node or adding additional nodes.

Riedel’s Bolero is an expandable full-roaming DECT-based intercom using the license-free 1.9 GHz frequency range. Linked to Artist, Bolero can be used as a wireless belt pack, wireless key panel or a mobile radio transmitter. Decentralised antennas connect to AES67 switches and then to Artist frames equipped with AES67 client cards. The belt packs support Bluetooth 4.1, allowing either a Bluetooth headset or a mobile phone to be connected. When a mobile phone is connected, the belt pack can act like an in-car hands-free phone so users can receive calls on their phone and talk/listen via their belt pack headset. Users can also connect a call into the intercom matrix, eliminating the need for a telephone hybrid. The belt pack itself features six buttons for each of the six intercom channels, plus a separate reply button accessing the most recent channel that called. “Bolero has received recent attention for its use in three medical settings to help with treatment of Covid-19 patients,” comments Riedel founder and CEO Thomas Riedel. “We have also introduced Distag, a lightweight, wearable device that alerts users if people around them aren’t maintaining a safe distance.”

RTS Telex’ describes its OMS (Omneo Main Station) as bridging legacy analog party-line users who wish to migrate to digital functionality while using their existing equipment. It interconnects with the company’s digital matrix products including keypanels, wireless and digital belt packs. It can also be used as a stand-alone base station for the RTS Roameo DECT-based digital wireless communication system. OMS is available in five versions: analog only, analog plus, basic, intermediate and advanced. Configuration and control can be performed from the front panel and display. RTS’ RVON (Voice Over Network) can be used for establishing communications over long distance and across different subnets. One of four user-selectable voice coders is used to compress digital audio to a low bitrate suitable for internet transmission. A high compression audio codec is intended for long-distance satellite transmissions. A low compression codec is commonly used when higher bandwidth is available. Each device can communicate with another RVON-enabled matrix or keypanel anywhere in the world and can be monitored via SNMP.

The RVON product family supports ancillary data control for use with RTS Intelligent Trunking. These products enable trunking over IP for local to worldwide connectivity. IPedit is a Windows-based GUI (graphical user interface) application for configuring and displaying RVON VoIP devices connected to the matrix. An enhanced version of IPEdit is available which can configure multiple RVON devices simultaneously.

Sonifex recently introduced two new audio-over-IP commentator units. Both are smaller than the existing Sonifex CM-CU1 single four-wire unit and include more features. Model AVN-CU2-Dante has two mic/line inputs with a wide, adjustable gain range and +48 volt phantom power as well as two stereo headphone outputs with lockable jack sockets. It uses power-over-Ethernet via Neutrik EtherCon connectors, with primary and secondary ports for power and network data redundancy. SFP cages are also available for networking and there is an additional four-pin XLR 12V DC input. The unit supports up to 16 input and output audio-over-IP channels and up to 16 simultaneous input and output audio-over-IP streams. Stream setup to and from the unit is initially via Dante Controller software with more detailed configuration performed via the built-in web GUI. An RGB display split into multiple sections allows metering and control of up to 24 audio sources. Colour-coded rotary encoders can be used to adjust signal level and pan. An integral mix matrix can be used to mix physical and audio-over-IP sources to four-wire and audio-over-IP destinations. The unit has six pushbutton rotary encoders and 12 key-cap buttons which can be assigned to control input and output levels and panning. Each rotary encoder has a separate colour-coded meter section showing the channel name, detailed level metering, left/right panning and a limiter indication, on a bright daylight reading display. Model AVN-CU4-Dante is a dual version of the AVN-CU2-Dante suitable for operation by three or four commentators. It provides four mic/line inputs and four stereo headphone outputs with lockable jack sockets.

Studio Technologies Model 5422A Dante Intercom Audio Engine is designed for creating party-line intercom circuits when used with Dante-compatible products. The ‘A’ version offers an auto mix function and also includes expanded network connectivity with three Gigabit Ethernet ports. In addition to creating virtual PL intercom circuits, the unit can provide other Dante-based on-air, talent cueing, audio mixing and interfacing resources. It uses 32-bit digital processing and is available with 32 or 64 input and output channels. Auto Mix audio level control helps to ensure that all party-line users contribute an equal audio level to an intercom channel. It can also be used when using the unit’s summing mode. The Model 5422A also features an audio control mode that allows multi-channel switching functions to be implemented easily. High-frequency audio tones provide control of Dante audio input channels that are routed to normally-active and normally-inactive audio output channels. The Model 5422A supports three GigE network connections rather than the two provided by the Model 5422. Two can be designated for Dante redundancy while the third is used to access the Model 5422A’s management port. This allows independent networks to support dual Dante audio paths and the unit’s monitoring and configuration web pages. “With the Model 5422A, we’ve made significant improvements in both audio performance and application compatibility,” says Studio Technologies’ president Gordon Kapes. “Auto Mix offers an increased level of satisfaction with party-line intercom audio. Larger installations can benefit from the ability to maintain separate Dante audio and management networks. Firmware updates can now be performed using a USB flash drive so a facility’s network security restrictions will no longer interfere with the ability to keep units up-to-date.”