Getting to Grips with Camera Supports 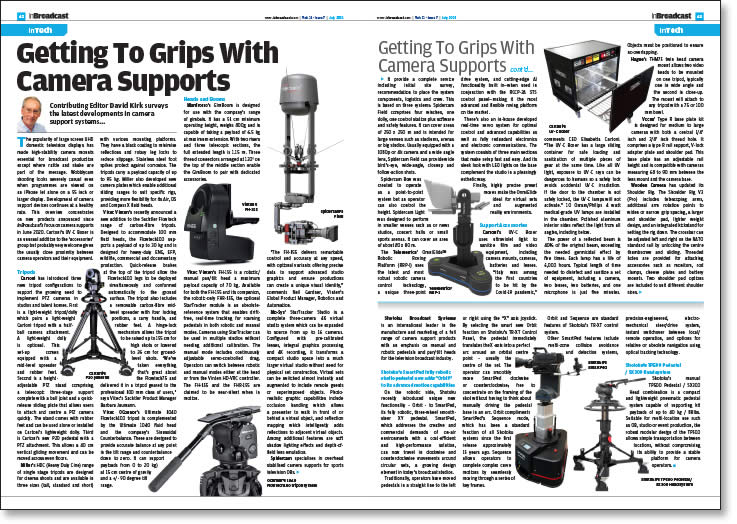 The popularity of large screen UHD domestic television displays has made high-stability camera mounts essential for broadcast production except where rattle and shake are part of the message. Wobblycam shooting looks severely casual even when programmes are viewed on an iPhone let alone on a 55 inch or larger display. Development of camera support devices continues at a healthy rate. This overview concentrates on new products announced since InBroadcast’s focus on camera supports in June 2020. Cartoni’s UV-C Boxer is an unusual addition to the ‘accessories’ group but probably very welcome given the usually close proximity between camera operators and their equipment.

Tripods
Cartoni has introduced three new tripod configurations to support the growing need to implement PTZ cameras in studios and talent homes. First is a light-weight tripod/dolly which pairs a light-weight Cartoni tripod with a half-ball camera attachment. A light-weight dolly is optional. This set-up comes equipped with a mid-level spreader and rubber feet. Second is a height-adjustable PTZ stand comprising a telescopic three-stage support complete with a ball joint and a quick-release sliding plate that allows users to attach and centre a PTZ camera quickly. The stand comes with rubber feet and can be used alone or installed on Cartoni’s lightweight dolly. Third is Cartoni’s new P20 pedestal with a PTZ attachment. This allows a 40 cm vertical gliding movement and can be moved across even floors.

Vitec Vinten’s recently announced a new addition to the Sachtler Flowtech range of carbon-fibre tripods. Designed to accommodate 100 mm fluid heads, the Flowtech100 sup-ports a payload of up to 30 kg and is designed for heavy-duty ENG, EFP, wildlife, commercial and documentary production. Quick-release brakes at the top of the tripod allow the Flowtech100 legs to be deployed simultaneously and conformed automatically to the ground surface. The tripod also includes a removable carbon-fibre mid-level spreader with four locking positions, a carry handle, and rubber feet. A hinge-lock mechanism allows the tripod to be raised up to 155 cm for high shots or lowered to 26 cm for ground-level shots. “We’ve taken everything that’s great about the Flowtech75 and delivered it in a tripod geared to the professional 100 mm class of users,” says Vitec’s Sachtler Product Manager Barbara Jaumann.

Vitec OConnor’s Ultimate 1040 Flowtech100 tripod is complemented by the Ultimate 1040 fluid head and the company’s Sinusoidal Counterbalance. These are designed to provide accurate balance at any point in the tilt range and counterbalance down to zero. It can support payloads from 0 to 20 kg) at 15 cm centre of gravity and a +/- 90 degree tilt range.

Heads and Booms
Manfrotto’s GimBoom is designed for use with the company’s range of gimbals. It has a 51 cm minimum operating height, weighs 800g and is capable of taking a payload of 6.5 kg at maximum extension. With two risers and three telescopic sections, the full extended length is 1.15 m. Three thread connectors arranged at 120° on the top of the middle section enable the GimBoom to pair with dedicated accessories.

Vitec Vinten’s FH-155 is a robotic/manual pan/tilt head a maximum payload capacity of 70 kg. Available for both the FH-155 and its companion, the robotic-only FHR-155, the optional StarTracker module is an absolute-reference system that enables drift-free, real-time tracking for roaming pedestals in both robotic and manual modes. Cameras using StarTracker can be used in multiple studios without needing additional calibration. The manual mode includes continuously adjustable servo-controlled drag. Operators can switch between robotic and manual modes either at the head or from the Vinten HD-VRC controller. The FH-155 and the FHR-155 are claimed to be near-silent when in motion.
“The FH-155 delivers remarkable control and accuracy at any speed, with optional variants offering precise data to support advanced studio graphics and ensure productions can create a unique visual identity,” comments Neil Gardner, Vinten’s Global Product Manager, Robotics and Automation.

Mo-Sys’ StarTracker Studio is a complete three-camera 4K virtual studio system which can be expanded to source from up to 16 cameras. Configured with pre-calibrated lenses, integral graphics processing and 4K recording, it transforms a compact studio space into a much larger virtual studio without need for physical set construction. Virtual sets can be switched almost instantly and augmented to include remote guests or superimposed objects. Photo-realistic graphic capabilities include occlusion handling which allows a presenter to walk in front of or behind a virtual object, and reflection mapping which intelligently adds reflections to adjacent virtual objects. Among additional features are soft shadow lighting effects and depth-of-field lens emulation.

Spidercam specialises in overhead stabilised camera supports for sports television OBs.
It provide a complete service including initial site survey, recommendation to place the system components, logistics and crew. This is based on three systems: Spidercam Field comprises four winches, one dolly, one control station plus software and safety features. It can cover areas of 250 x 250 m and is intended for large venues such as stadiums, arenas or big studios. Usually equipped with a 1080p or 4k camera and a wide angle lens, Spidercam Field can provide wide bird’s-eye, wide-angle, closeup and follow-action shots.

Spidercam Bow was created to operate as a point-to-point system but an operator can also control the height. Spidercam Light was designed to perform in smaller venues such as or news studios, concert halls or small sports arenas. It can cover an area of about 80 x 80 m.

The Telemetrics’ OmniGlide™ Robotic Roving Platform (RRP-I) uses the latest and most robust robotic camera control technology, a unique three-point drive system, and cutting-edge AI functionality built in—when used in conjunction with the RCCP-2A STS control panel—making it the most advanced and flexible roving platform on the market.

There’s also an in-house developed real-time servo system for optimal control and advanced capabilities as well as fully redundant electronics and electronic communications. The system consists of three main sections that make setup fast and easy. And its sleek look with LED lights on the base complement the studio in a pleasingly esthetic way.

Support Accessories
Cartoni’s UV-C Boxer uses ultraviolet light to sanitize film and video equipment, including camera mounts, cameras, batteries and lenses. “Italy was among the first countries to be hit by the Covid-19 pandemic,” comments CEO Elisabetta Cartoni. “The UV-C Boxer has a large sliding container for safe loading and sanitization of multiple pieces of gear at the same time. Like all UV light, exposure to UV-C rays can be dangerous to humans so a safety lock avoids accidental UV-C irradiation. If the door to the chamber is not safely locked, the UV-C lamps will not activate.” 10 Osram/Philips 4 watt medical-grade UV lamps are installed in the chamber. Polished aluminum interior sides reflect the light from all angles, including below.

The power of a reflected beam is 40% of the original beam, exceeding the needed germicidal effect by five times. Each lamp has a life of 6,000 hours. Typical length of time needed to disinfect and sanitize a set of equipment, including a camera, two lenses, two batteries, and one microphone is just five minutes. Objects must be positioned to ensure no overlapping.

Hague’s THM75 twin head camera mount allows two video heads to be mounted on one tripod, typically one in wide angle and the second in close-up. The mount will attach to any tripod with a 75 or 100 mm bowl.

Vocus’ Type R base plate kit is designed for medium to large cameras with both a central 1/4’ inch and 3/8’ inch thread hole. It comprises a type R rail support, V-lock adapter plate and shoulder pad. This base plate has an adjustable rail height and is compatible with cameras measuring 68 to 90 mm between the lens mount and the camera base.

Wooden Camera has updated its Shoulder Rig. The Shoulder Rig V3 (Pro) includes telescoping arms, additional arm rotation points to widen or narrow grip spacing, a larger and shoulder pad, lighter weight design, and an integrated kickstand for setting the rig down. The crossbar can be adjusted left and right on the NATO standard rail by unlocking the centre thumbscrew and sliding. Threaded holes are provided for attaching accessories such as monitors, rod clamps, cheese plates and battery mounts. Two shoulder pad options are included to suit different shoulder sizes.

Shotoku Broadcast Systems is an international leader in the manufacture and marketing of a full range of camera support products with an emphasis on manual and robotic pedestals and pan/tilt heads for the television broadcast industry.

Traditionally, operators have moved pedestals in a straight line to the left or right using the “X” axis joystick.  By selecting the smart new Orbit function on Shotoku’s TR-XT Control Panel, the pedestal immediately translates the X-axis into a perfect arc around an orbital centre point – usually the centre of the set. The operator can smoothly move SmartPed clockwise or counterclockwise; free to concentrate on the framing of the shot without having to think about manually driving the pedestal base in an arc. Orbit compliments SmartPed’s Sequence mode, which has been a standard function of all Shotoku systems since the first release approximately 15 years ago. Sequence allows operators to complete complex curve motions by seamlessly moving through a series of key frames.

Shotoku’s TP500 Pedestal / SX300 Head system
Shotoku’s manual TP500 Pedestal / SX300 Head combination is a compact and lightweight pneumatic pedestal system capable of supporting kit payloads of up to 40 kg / 88lbs. Suitable for multi-location use such as OB, studio or event production, the robust modular design of the TP500 allows simple transportation between locations, without compromising its ability to provide a stable platform for camera operators.