Dynamic Ad Insertion - a technology to DAI for 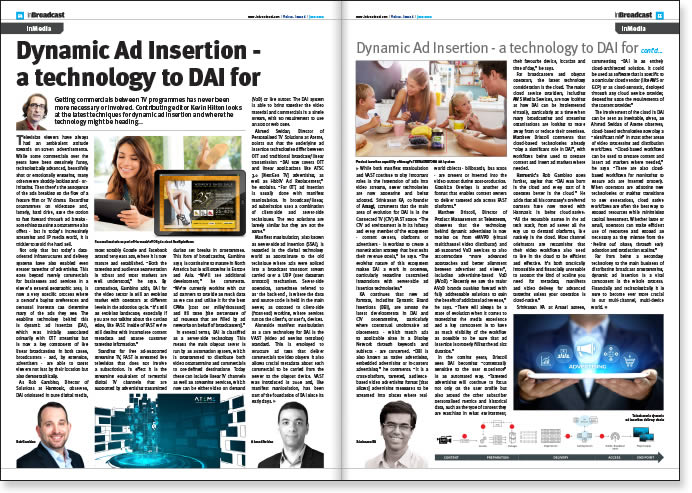 Getting commercials between TV programmes has never been more necessary or involved. Contributing editor Kevin Hilton looks at the latest techniques for dynamic ad insertion and where the technology might be heading...

Television viewers have always had an ambivalent attitude towards on-screen advertisements. While some commercials over the years have been genuinely funny, technologically advanced, beautifully shot or emotionally engaging, many others were shoddy-looking and - or - irritating. Then there’s the annoyance of the ads breaking up the flow of a feature film or TV drama. Recording programmes on videotape and, latterly, hard drive, gave the option to fast forward through ad breaks - something pausing a programme also offers - but in today’s increasingly streaming and IP media world, it is trickier to avoid the hard sell.

Not only that but today’s data-oriented infrastructures and delivery systems have also enabled even greater targeting of advertising. This goes beyond merely commercials for businesses and services in a viewer’s general geographic area; is now a very specific process where a person’s buying preferences and personal interests can determine many of the ads they see. The enabling technology behind this is dynamic ad insertion (DAI), which was initially associated primarily with OTT streaming but is now a key component of live linear broadcasting. In both cases, broadcasters - and, by extension, advertisers - are able to target viewers not just by their location but also demographically.

As Rob Gambino, Director of Solutions at Harmonic, observes, DAI originated in pure digital media, most notably Google and Facebook around ten years ago, where it is now mature and established. “Both the targeting and audience segmentation is robust and most markets are well understood,” he says. By comparison, Gambino adds, DAI for the video sector is still an evolving market with operators at different levels in the adoption cycle. “It’s still an evolving landscape, especially if you are not talking about the cutting edge, like FAST. Inside of FAST we’re still dealing with incomplete content metadata and sparse customer targeting information.”

Standing for free ad-supported streaming TV, FAST is streamed live television that does not involve a subscription. In effect it is the streaming equivalent of terrestrial digital TV channels that are supported by advertising transmitted during set breaks in programmes. This form of broadcasting, Gambino says, is continuing to mature in North America but is still growing in Europe and Asia. “We’ll see additional development,” he comments. “We’re currently working with our ad partners to provide as much data as we can and utilise it for the best CPMs [cost per mille/thousand] and fill rates [the percentage of ad requests that are filled by ad networks on behalf of broadcasters].”

In general terms, DAI is classified as a server-side technology. This means the main playout server is run by an automation system, which is programmed to distribute both video programming and commercials to pre-defined destinations. Today these can include linear TV channels as well as streaming services, which now can be either video on demand (VoD) or live output. The DAI system is able to bring together the video material and commercials in a single stream, with no requirement to use an app or web page.

Ahmed Swidan, Director of Personalised TV Solutions at Ateme, points out that the underlying ad insertion technologies differ between OTT and traditional broadcast/linear transmission. “DAI now covers OTT and linear applications like ATSC 3.0 [NextGen TV] advertising, as well as HbbTV Ad Replacement,” he explains. “For OTT, ad insertion is usually done with manifest manipulation. In broadcast/linear, ad substitution uses a combination of client-side and server-side techniques. The two solutions are largely similar but they are not the same.”

Manifest manipulation, also known as server-side ad insertion (SSAI), is regarded in the digital technology world as approximate to the old technique where ads were spliced into a broadcast transport stream carried over a UDP (user datagram protocol) mechanism. Server-side operation, sometimes referred to as ‘the back-end’, is where the data and source code is held in the main server, as opposed to client-side (front-end) working, where services run on the client’s, or user’s, devices.

Alongside manifest manipulation as a core technology for DAI is the VAST (video ad serving template) standard. This is employed to structure ad tags that deliver commercials to video players. It also allows crucial metadata about each commercial to be carried from the server to the playout device. VAST was introduced in 2008 and, like manifest manipulation, has been part of the foundation of DAI since its early days. While both manifest manipulation and VAST continue to play important roles in the integration of ads into video streams, newer technologies are now appearing and being adopted. Srinivasan KA, co-founder of Amagi, comments that the main area of evolution for DAI is in the Connected TV (CTV) FAST space. “The CTV ad environment is in its infancy and every member of the ecosystem - content owners, platforms or advertisers - is working to create a monetization strategy that best suits their revenue goals,” he says. “The evolving nature of this ecosystem makes DAI a work in progress, particularly regarding customised integrations with server-side ad insertion technologies.”

KA continues that new ad formats, including Dynamic Brand Insertions (DBI), are among the latest developments in DAI and CTV programming, particularly where contextual unobtrusive ad placements - which match ads to applicable sites in a Display Network through keywords and subjects - are concerned. “DBI is also known as native advertising, embedded advertising or in-content advertising,” he comments. “It is a cross-platform, targeted, audience-based video advertising format [that allows] advertising messages to be streamed into places where real-world objects - billboards, bus stops - are present or inserted into the video output during post-production. Graphics Overlays is another ad format that enables content owners to deliver targeted ads across FAST platforms.”

Matthew Driscoll, Director of Product Management at Telestream, observes that the technology behind dynamic advertising is now moving on from vMVPD (virtual multichannel video distributor) and ad-supported VoD services to also accommodate “more advanced approaches and better alignment between advertiser and viewer”, including advertising-based VoD (AVoD). “Recently we saw the major AVoD brands pushing forward with fully addressable solutions to gain the benefit of additional ad revenue,” he says. “There will always be a state of evolution when it comes to monetizing the media experience and a key component is to have as much visibility of the workflow as possible to be sure that ad insertion is properly filling the ad slot duration.”

In the coming years, Driscoll sees DAI becoming “contextually sensitive to the user experience” in an automated way. “Targeted advertising will continue to focus not only on the user profile but also around the other subscriber personalised metrics and historical data, such as the type of content they are watching in what environment, their favourite device, location and time of day,” he says. For broadcasters and playout operators, the latest technology consideration is the cloud. The major cloud service providers, including AWS Media Services, are now looking at how DAI can be implemented virtually, particularly at a time when many broadcasting and streaming organisations are looking to move away from or reduce their premises. Matthew Driscoll comments that cloud-based technologies already “play a significant role in DAI”, with workflows being used to prepare content and insert ad markers where needed.

Harmonic’s Rob Gambino goes further, saying that “DAI was born in the cloud and every part of it operates better in the cloud.” He adds that all his company’s preferred partners have now moved with Harmonic in being cloud-native: “All the reputable names in the ad tech stack, from ad server all the way up to demand platforms, live natively in the cloud. Most channel originators are recognising that their video workflows also need to live in the cloud to be efficient and effective. It’s both practically impossible and financially untenable to support the kind of scaling you need for metadata, manifests and video delivery for advanced targeting unless your operation is cloud-native.”

Srinivasan KA at Amagi agrees, commenting, “DAI is an entirely cloud-architected solution. It could be used as software that is specific to a particular cloud vendor (like AWS or GCP) or as cloud-agnostic, deployed through any cloud service provider, depending upon the requirements of the content provider.”

The involvement of the cloud in DAI can be seen as inevitable, given, as Ahmed Swidan of Ateme observes, cloud-based technologies now play a “significant role” in most other areas of video processing and distribution workflows. “Cloud-based workflows can be used to prepare content and insert ad markers where needed,” he says. “There are also cloud-based workflows for monitoring to ensure ads are inserted properly. When operators are adopting new technologies or making transitions to new generations, cloud native workflows are often the best way to expand resources while minimising capital investment. Whether large or small, operators can make efficient use of resources and expand as necessary as they migrate from the ‘feeling out’ phase, through early adoption and production scaling.”

Far from being a secondary technology to the main business of distributing broadcast programming, dynamic ad insertion is a vital component in the whole process. Financially and technologically it is sure to become ever more crucial in our multi-channel, multi-device world.