Developments in audio over IP 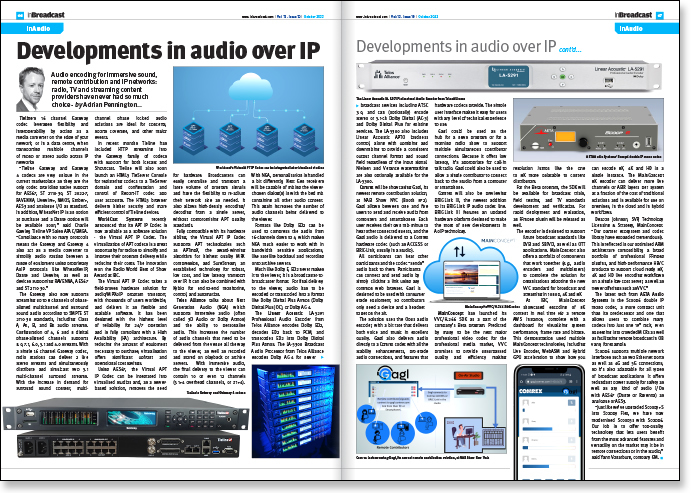 Audio encoding for immersive sound, remote contribution and IP networks: radio, TV and streaming content providers have never had so much choice - by Adrian Pennington...

Tieline's 16 channel Gateway codec leverages flexibility and interoperability by acting as a media converter on the edge of your network, or in a data centre, when transporting multiple channels of mono or stereo audio across IP networks.

“Tieline Gateway and Gateway 4 codecs are very unique in the current marketplace as they are the only codec providing native support for AES67, ST 2110-30, ST 2022-7, RAVENNA, Livewire+, NMOS, Ember+, AES3 and analogue I/O as standard. In addition, WheatNet-IP is an option at purchase and a Dante option will be available soon,” said Charlie Gawley, Tieline VP Sales APAC/EMEA. “Compliance with so many protocols means the Gateway and Gateway 4 also act as a media converter to simplify audio routing between a range of equipment using proprietary AoIP protocols like WheatNet-IP, Dante and Livewire, as well as devices supporting RAVENNA, AES67 and ST 2110-30.”

The Gateway also now supports streaming up to 8 channels of phase-aligned multichannel and surround sound audio according to SMPTE ST 2110-30 standards, including Class A, Ax, B, and Bx audio streams. Configuration of 4, 6 and 8 digital phase-aligned channels supports 8.0, 7.1, 6.0, 5.1 and 4.0 streams. With a single 16 channel Gateway codec, radio stations can deliver 2 live stereo streams and simultaneously distribute and simulcast two 5.1 multi-channel surround streams. With the increase in demand for surround sound content, multi-channel phase locked audio solutions are ideal for concerts, sports coverage, and other major events.

In recent months Tieline has included HTTP streaming into the Gateway family of codecs with support for both Icecast and Shoutcast. Tieline will also soon launch an HTML5 TieServer Console for registering codecs to a TieServer domain and configuration and control of Report-IT codec app user accounts. The HTML5 browser delivers higher security and more efficient control of Tieline devices.

WorldCast Systems recently announced that its APT IP Codec is now available as a software solution - the Virtual APT IP Codec. The virtualization of APT codecs is a great opportunity for radios to simplify and improve their program delivery while reducing their costs. The innovation won the Radio World Best of Show Award at IBC.

The Virtual APT IP Codec takes a field-proven hardware solution for audio/MPXoIP program transport, with thousands of users worldwide, and delivers it as flexible and scalable software. It has been designed with the highest level of reliability for 24/7 operation and is fully compliant with a High Availability (HA) architecture. By reducing the amount of equipment necessary to purchase, virtualisation offers significant upfront and operational cost savings.

Using AES67, the Virtual APT IP Codec can be integrated into virtualised studios and, as a server-based solution, removes the need for hardware. Broadcasters can easily centralise and transport a large volume of program signals and have the flexibility to re-adjust their network size as needed. It also allows high-density encoding/decoding from a single server, without compromising APT quality standards.

Fully compatible with its hardware sibling, the Virtual APT IP Codec supports APT technologies such as APTmpX, the award-winning algorithm for highest quality MPX compression, and SureStream, an established technology for robust, low cost, and low latency transport over IP. It can also be combined with Kybio for end-to-end monitoring, control, and automation.

Telos Alliance talks about Next Generation Audio (NGA) which supports immersive audio (often called 3D Audio or Dolby Atmos) and the ability to personalise audio. This increases the number of audio channels that need to be delivered from the venue all the way to the viewer, as well as recorded and stored on playback or archive servers.  With immersive audio, the final delivery to the viewer can contain 10 or even 12 channels (5.1+4 overhead channels, or 7.1+4).  With NGA, personalisation is handled a bit differently, Next Gen receivers will be capable of mixing the viewer-chosen dialog(s) in with the bed mix containing all other audio content. This again increases the number of audio channels being delivered to the viewer.

Formats like Dolby ED2 can be used to compress the audio from 16-channels down to 4, which makes NGA much easier to work with in bandwidth sensitive applications, like satellite backhaul and recording onto archive servers.

The Linear Acoustic LA-5291 Professional Audio Encoder from Telos Alliance encodes Dolby ED2, decodes ED2 back to PCM, and transcodes ED2 into Dolby Digital Plus Atmos. The LA-5300 Broadcast Audio Processor from Telos Alliance encodes Dolby AC-4 for newer broadcast services including ATSC 3.0, and can (optionally) encode stereo or 5.1-ch Dolby Digital (AC-3) and Dolby Digital Plus for existing services. The LA-5300 also includes Linear Acoustic APTO loudness control, along with upmixing and downmixing to provide a consistent output channel format and sound field regardless of the input signal. Nielsen and Verance watermarking are also optionally available for the LA-5300.

Gagl allows between one and five users to send and receive audio from computers and smartphones. Each user receives their own mix-minus to hear other connected guests, and the Gagl audio is delivered to a Comrex hardware codec (such as ACCESS or BRIC-Link, usually in a studio).

All participants can hear other participants and the codec “sends” audio back to them. Participants can connect and send audio by simply clicking a link using any common web browser. Gagl is designed to be used with consumer grade equipment, so contributors only need a device and a headset to get on the air.

The solution uses the Opus audio encoder, with a bit rate that delivers both voice and music in excellent quality. Gagl also delivers audio directly to a Comrex codec with all the stability enhancements, pro-grade audio connections, and features that hardware codecs provide. The simple user interface makes it easy for users with any level of technical experience to use.

Gagl could be used as the hub for a news program or for a morning radio show to support multiple simultaneous contributor connections. Because it offers low latency, it’s appropriate for call-in talk radio. Gagl could also be used to allow a single contributor to connect back to the studio from a computer or smartphone.

Comrex will also be previewing BRIC-Link III, the newest addition to its BRIC-Link IP audio codec line. BRIC-Link III features an updated hardware platform designed to make the most of new developments in AoIP technology.

MainConcept has launched its VVC/H.266 SDK as a part of the company’s Beta program. Predicted by many to be the next major professional video codec for the professional media market, VVC promises to provide unsurpassed quality and efficiency making resolution jumps like the one to 8K more palatable to content distributors.

For the Beta program, the SDK will be available for broadcast trials, field testing, and TV standards development and verification. For rapid deployment and evaluation, an FFmpeg plugin will be released as well.   The encoder is designed to support future broadcast standards like DVB and SBTVD, as well as OTT applications. MainConcept also offers a portfolio of components that work together (e.g., audio encoders and multiplexers) to complete the solution for organisations adopting the new VVC standard for broadcast and streaming in 1080p, 4K and 8K.

At IBC, MainConcept showcased encoding of 8K content in real time via a remote AWS instance, complete with a dashboard for visualizing system performance, frame rate and bitrate. This demonstration used multiple MainConcept technologies, including Live Encoder, WebASM and Hybrid GPU acceleration to show how you can encode 8K, 4K and HD in a single instance. The MainConcept 8K encoder can deliver more live channels or ABR layers per system at a fraction of the cost of traditional solutions and is available for use on premises, in the cloud and in hybrid workflows.

Deacon Johnson, SVP, Technology Licensing & Strategy, MainConcept. “Our partner ecosystem and codec library have expanded tremendously. This is reflected in our optimised ARM architecture compatibility, a broad portfolio of professional FFmpeg plugins, and high-performance HEVC products to support cloud-ready 8K, 4K and HD live encoding workflows on a single low-cost server, as well as newer offerings such as VVC.”

The latest tech from AETA Audio Systems is the Scoop6 double IP mono codec, a more compact unit than its predecessor and one that allows users to combine many codecs into just one 19” rack, even squeezing into crowded MCRs as well as facilitating remote broadcast in OB vans, for example.

Scoop6 supports multiple network interfaces such as two Ethernet ports as well as 4G and 5G connections, so it’s also adaptable for all types of broadcast applications. It offers redundant power supply for safety as well as any kind of audio I/Os with AES67 (Dante or Ravenna) as analogue or AES3.

“Just like we’ve upgraded Scoopy+S into Scoopy Flex, we have now modernised Scoop5s with Scoop6. Our job is to offer top-quality technology that lets users benefit from the most advanced features and versatility on the market may it be in remote connections or in the studio,” said Yann Vonarburg, company GM.