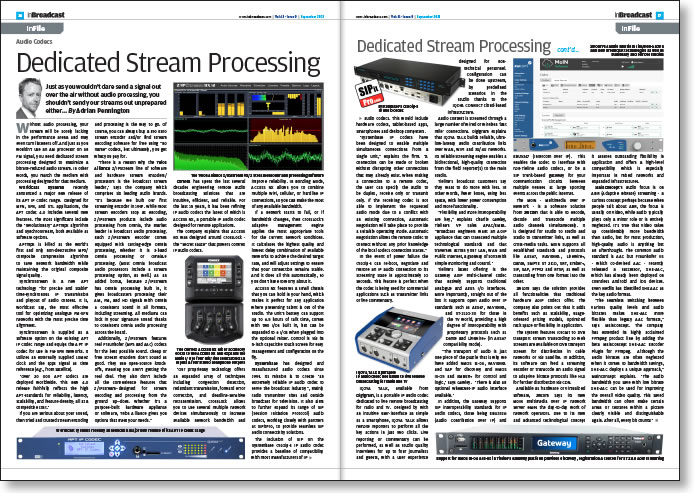 Just as you wouldn’t dare send a signal out over the air without audio processing, you shouldn’t send your streams out unprepared either... By Adrian Pennington

Without audio processing, your stream will be sorely lacking in the performance arena and may even turn listeners off. And just as you wouldn’t use an AM processor on an FM signal, you need dedicated stream processing designed to maximize a bitrate-reduced audio stream. In other words, you match the medium with processing designed for that medium.

WorldCast Systems recently announced a major new release of its APT IP Codec range.  Designed for MFN, SFN, and STL applications, the APT Codec 4.0 includes several new features. The most significant include the “revolutionary” APTmpX algorithm and SynchroStream, both available as software options.

APTmpX is billed as the world’s first and only non-destructive MPX/composite compression algorithm to save network bandwidth while maintaining the original composite signal quality.

SynchroStream is a new APT technology “for precise and stable” time-synchronous IP transmission and playout of audio content. It is, WorldCast say, the most effective tool for optimizing analogue FM-SFN networks with the most precise time alignment.

SynchroStream is supplied as a software option on the existing APT IP Codec range and equips the APT IP Codec for use in FM-SFN networks. It utilizes an externally supplied 10MHz clock and the 1pps signal as time reference (e.g., from satellite).

“Over 20 000 APT codecs are deployed worldwide. This new 4.0 release faithfully reflects the high APT-standards for reliability, latency, scalability, and feature-density; all at a competitive cost.”

If you are serious about your sound, then tried and trusted stream encoding and processing is the way to go. Of course, you can always buy a 150 Euro stream encoder and/or find stream encoding software for free using “no name” codecs, but ultimately, you get what you pay for.

They also don’t include all the convenience features that Z/IPStream—designed for stream encoding and processing from the ground up—does. Whether it’s a purpose-built hardware appliance or software, Telos Alliance gives you options that meet your needs.”

Comrex has spent the last several decades engineering remote audio broadcasting solutions that are intuitive, efficient, and reliable. For the last 15 years, it has been refining IP audio codecs the latest of which is ACCESS NX, a portable IP audio codec designed for remote applications.

The company explains that ACCESS NX was designed around CrossLock - the “secret sauce” that powers Comrex IP audio codecs.

“Our proprietary technology offers an expanded array of techniques including congestion detection, redundant transmission, forward error correction, and deadline-sensitive retransmission. CrossLock allows you to use several multiple network devices simultaneously to increase available network bandwidth and improve reliability. In Bonding Mode, ACCESS NX allows you to combine multiple WiFi, cellular, or hardline IP connections, so you can make the most of any available bandwidth.

If a network starts to fail, or if bandwidth changes, then CrossLock’s adaptive management engine applies the most appropriate tools for the current network conditions. It calculates the highest quality and lowest delay combination of available networks to achieve the desired target rate, and will adjust settings to ensure that your connection remains stable. And it does all this automatically, so you don’t have to worry about it.

ACCESS NX features a small chassis that you can hold in your hand, which makes it perfect for any application where presenting talent is out of the studio. The unit’s battery can support up to 6.5 hours of talk time, comes with two I/Os built in, but can be expanded to 6 I/Os when plugged into the optional mixer. Control is via its 5-inch capacitive touch screen for easy management and configuration on the fly.

Systembase has designed and manufactured audio codecs since 1991. Its mission is to create “an extremely reliable IP audio codec to serve the broadcast industry”, mainly radio transmitter sites and outside broadcast for television. It also aims to further expand its range of SIP (Session Initiation Protocol) audio codecs, working closely with partners at SIPitPro, to provide seamless SIP audio connectivity solutions.

The inclusion of SIP on the Systembase C510ip-s IP audio codec provides a baseline of compatibility with most manufacturers of IP audio codecs. This would include hardware codecs, tablet-based apps, smartphones and desktop computers.

“Systembase IP Codecs have been designed to enable multiple simultaneous connections from a single unit,” explains the firm. “A connection can be made or broken without disrupting other connections that may already exist. When making a connection to a remote codec, the user can specify the audio to be duplex, receive only or transmit only. If the receiving codec is not able to implement the requested audio mode due to a conflict with an existing connection, Automatic Negotiation will take place to provide a suitable operating mode. Automatic Negotiation allows the remote codec to connect without any prior knowledge of the local codecs connection status.”

In the event of power failure the C510ip-s can re-boot, negotiate and restore an IP audio connection to its streaming state in approximately 10 seconds. This feature is perfect when the codec is being used for commercial applications such as transmitter links or live commentary.

IQOYA TALK, available from Digigram, is a portable IP audio codec dedicated to live remote broadcasting for radio and TV. Designed by with an intuitive user-interface as simple as a smartphone, IQOYA TALK allows remote reporters to perform all the key actions in just two clicks. Live reporting or commentary can be performed, as well as studio quality interviews for up to four journalists and guests, with a user experience designed for non-technical personnel. Configuration can be done upstream, by predefined scenarios in the studio thanks to the IQOYA CONNECT cloud-based infrastructure.

Its reliable streaming engine enables a bidirectional, high-quality connection from the field reporter(s) to the main studio.

Tieline’s broadcast customers say they want to do more with less. In other words, fewer boxes, using less space, with lower power consumption and more functionality.

“Broadcast engineers want an AoIP appliance that can transcend multiple technological standards and that traverses across your LAN, WAN and Public Internet, a gateway of sorts with simple monitoring and control.”

Tieline’s latest offering is the Gateway AoIP multi-channel codec that natively supports traditional analogue and AES3 I/O interfaces. More importantly, straight out of the box it supports open Audio over IP standards such as AES67, RAVENNA, and ST-2110-30 for those in the TV world, providing a high degree of interoperability with proprietary protocols such as Dante and Livewire+ (in AES67 compatibility mode).

“The transport of audio is just one piece of the puzzle that is why we have added NMOS IS-04, RAVENNA and SAP for discovery and NMOS IS-05 and EMBER+ for control and logic,” says Gawley.  “There is also an optional WheatNet-IP audio interface available.”

In addition, the Gateway supports SIP interoperability standards for IP audio codecs, those being EBU3326 (Audio Contribution over IP) and EBU3347 (Intercom over IP).  This enables the codec to interface with non-Tieline audio codecs, or be a SIP trunk-based gateway for your communication circuits between multiple venues at large sporting events across the public internet.

The MoIN - Multimedia over IP Network - is a software solution from 2wcom that is able to encode, decode and transcode multiple audio channels simultaneously. It is designed for studio to studio and studio to transmitter links, as well as cross-media tasks. MoIN supports all established standards and protocols like AES67, RAVENNA, Livewire+, Dante, SMPTE ST 2110, SRT, Ember+, SIP, SAP, PTPv2 and RTSP, as well as transcoding from one format into the other.

2wcom says the solution provides all functionalities that traditional hardware AoIP codecs offer. The company also points out that it adds benefits such as scalability, usage-oriented pricing models, optimized rack space or flexibility in application.

Available as hardware or virtualized software, 2wcom says its new MoIN multimedia over IP network server eases the day-to-day work of network operators. Due to its new and advanced technological concept it assures outstanding flexibility in application and offers a high-level compatibility which is especially important in mixed networks and expanded infrastructures.

MainConcept’s audio focus is on ABR (Adaptive BitRate) streaming - a curious concept perhaps because when people talk about ABR, the focus is usually on video, while audio typically plays only a minor role or is entirely neglected. It’s true that video takes up considerably more bandwidth than audio, but for most production, high-quality audio is anything but an afterthought. The common audio standard is AAC but Fraunhofer IIS - which co-devised AAC - recently released a successor, xHE-AAC, which has already been deployed on countless Android and iOS devices. Even Netflix has identified xHE-AAC as the key audio format.

“The seamless switching between various quality levels and audio bitrates makes xHE-AAC more flexible than legacy AAC formats,” says MainConcept. The company has extended its highly acclaimed FFmpeg product line by adding the beta MainConcept xHE-AAC Encoder Plugin for FFmpeg.  Although the audio bitrates are often neglected when it comes to bandwidth savings, xHE-AAC deploys a unique approach,” MainConcept explains. “The audio bandwidth you save with low bitrate xHE-AAC can be used for improving the overall video quality. This saved bandwidth can often make certain areas or textures within a picture clearly visible and distinguishable again. After all, every bit counts!”