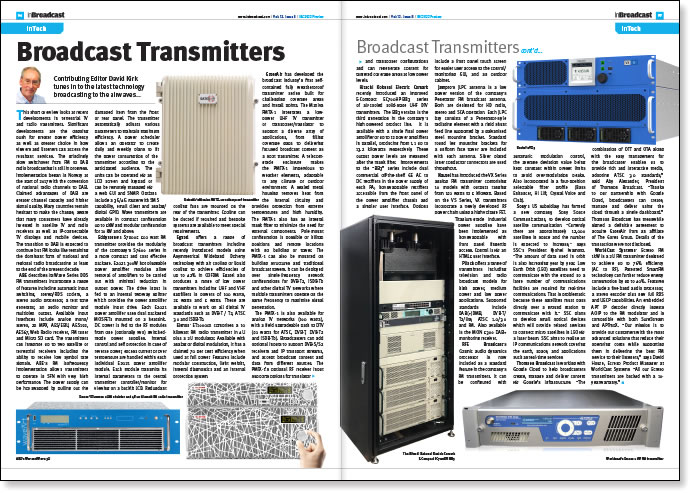 Contributing Editor David Kirk tunes in to the latest technology broadcasting to the airwaves...

This short overview looks at recent developments in terrestrial TV and radio transmitters. Significant developments are the ongoing push for greater power efficiency as well as greater choice in how viewers and listeners can access the resultant services. The grindingly slow switchover from FM to DAB radio broadcasting is still in progress. Implementation began in Norway at the start of 2017 with the conversion of national radio channels to DAB. Claimed advantages of DAB are greater channel capacity and higher signal quality. Many countries remain hesitant to make the change, aware that many consumers have already invested in satellite TV and radio receivers as well as IP-connectable TV displays and mobile devices. The transition to DAB is expected to continue but FM looks like remaining the dominant form of national and regional radio broadcasting at least to the end of the present decade.

ABE describes its Wave Series DDS FM transmitters incorporate a range of features including automatic input switching, stereo/RDS coders, a stereo audio processor, a test tone generator, an audio monitor and multiplex output. Available input interfaces include analog mono/stereo, 2x MPX, AES/EBU, AES192, AES67, Web Radio receiver, FM tuner and Micro SD card. The transmitters can integrate up to two satellite or terrestrial receivers including the ability to receive low symbol rate signals. ABE's FM isofrequency implementation allows transmitters to operate in SFN with very high performance. The power supply can be hot-swapped by pulling out the damaged item from the front or rear panel. The transmitter automatically adjusts various parameters to maintain maximum efficiency. A power scheduler allows an operator to create daily and weekly plans to fit the power consumption of the transmitter according to the anticipated audience. The units can be operated via an LCD screen and keypad or can be remotely managed via a web GUI and SNMP.

Options include a 3G/4G router with SMS capability, email client and analog/digital GPIO. Wave transmitters are available in compact configuration up to 5kW and modular configuration for 10 kW and above. Eddystone's S79005 500 watt FM transmitter provides the modularity of the company's S7600 series in a more compact and cost effective package. E2021 300W hot-pluggable power amplifier modules allow removal of amplifiers to be carried out with minimal reduction in output power. The drive input is fed to an internal two-way splitter which provides the power amplifier module input drive. Each E2021 power amplifier uses dual packaged MOSFETs mounted on a heatsink. DC power is fed to the RF modules from one (optionally two) switched-mode power supplies. Internal control and self protection in case of reverse power, excess current or over temperature are handled within each individual E2021 power amplifier module. Each module transmits its internal parameters to the central transmitter controller/monitor for viewing on a backlit LCD.

Redundant cooling fans are mounted on the rear of the transmitter. Cooling can be ducted if required and bespoke systems are available to meet special requirements.

Egatel offers a range of broadcast transmitters including recently introduced models using Asymmetrical Wideband Doherty technology with air cooling or liquid cooling to achieve efficiencies of up to 42% in COFDM. Egatel also produces a range of low power transmitters including UHF and VHF gapfillers in powers of 100 watts, 25 watts and 5 watts. These are available to work on all digital TV standards such as DVB-T / T2, ATSC 3.0 and ISDB-Tb.

Elenos' ET10000x comprises a 10 kilowatt FM radio transmitter in 4U plus a 2U modulator. Available with analog or digital modulation, it has a claimed 70 per cent efficiency when used at full power. Features include  modular construction, light weight, integral diagnostics and an internal protection system.

GatesAir has developed the broadcast industry’s first self-contained fully weatherproof transmitter series built for challenging coverage areas and install points. The Maxiva PMTX-1 integrates a low-power UHF TV transmitter or transposer/translator to support a diverse array of applications, from filling coverage gaps to delivering focused broadcast content as a spot transmitter. A telecom-grade enclosure makes the PMTX-1 impervious to weather elements, adaptable to any climate or outdoor environment. A sealed metal housing removes heat from the internal circuitry and provides protection from extreme temperatures and high humidity. The PMTX-1 also has an integral mask filter to minimize the need for external components. Pole-mount configuration is possible or hilltop positions and remote locations with no building or tower. The PMTX-1 can also be mounted on building structures and traditional broadcast towers. It can be deployed over single-frequency network configurations for DVB-T2, ISDB-Tb and other digital TV networks where multiple transmitters operate on the same frequency to maximise signal penetration.

The PMTX-1 is also available for analog TV networks (100 watts), with a field-upgradeable path to DTV (50 watts for ATSC, DVB-T, DVB-T2 and ISDB-Tb). Broadcasters can add optional inputs to support DVB-S/S2 receivers and IP transport streams, and accept broadcast content and data from different sources. The PMTX-1’s optional RF receiver input supports options for translator and transposer configurations and can regenerate content for targeted coverage areas at low power levels.

Hitachi Kokusai Electric Comark recently introduced an improved E-Compact EC700HP-BB3 series of air-cooled solid-state UHF DTV transmitters.  The BB3 version is the third generation in the company's high-powered product line.  It is available with a single final power amplifier or up to 12 power amplifiers in parallel, producing from 1.1 up to 13.2 kilowatts respectively. These output power levels are measured after the mask filter.  Improvements to the “BB3” series include dual commercial off-the-shelf GE AC to DC rectifiers in the power supply of each PA; hot-swappable rectifiers accessible from the front panel of the power amplifier chassis and a simpler user interface. Options include a front panel touch screen for easier user access to the control/monitoring GUI, and an outdoor cabinet.

Jampro's JLPC antenna is a low power version of the company's Penetrator FM broadcast antenna. Both are designed for HD radio, stereo and SCA operation. Each JLPC bay consists of a Penetrator-style radiating element with a rigid shunt feed line supported by a galvanised steel mounting bracket. Standard round leg mounting brackets for a uniform face tower are included with each antenna. Silver plated inner conductor connectors are used throughout.

Nautel has introduced the VX Series analog FM transmitter comprising 10 models with outputs ranging from 150 watts to 5 kilowatt. Based on the VS Series, VX transmitters incorporate a newly developed RF power chain using a high voltage FET. Titanium-grade industrial power supplies have been implemented as hot-swappable with front panel fingertip access. Control is via an HTML5 user interface.

Sony's US subsidiary has formed a new company, Sony Space Communications, to develop optical satellite communication. "Currently there are approximately 12,000 satellites in space and the number is expected to increase," says SSC's President Kyohei Iwamoto. "The amount of data used in orbit is also increasing year by year. Low Earth Orbit (LEO) satellites need to communicate with the ground so a large number of communications facilities are required for real-time communications. That is problematic because these satellites must pass directly over a ground station to communicate with it." SSC plans to develop small optical devices which will provide related services to connect micro satellites in LEO via a laser beam. SSC aims to realise an IP communications network covering the earth, space, and applications such as real-time services.

Thomson Broadcast is working with Google Cloud to help broadcasters create, manage and deliver content via Google’s infrastructure. “The combination of OTT and OTA along with the easy management for the broadcaster enables us to provide rich and interactive media, adopting ATSC 3.0 standards,” said Aby Alexander, President of Thomson Broadcast. “Thanks to our partnership with Google Cloud, broadcasters can create, manage and deliver using the cloud through a single dashboard.” Thomson Broadcast has meanwhile signed a definitive agreement to acquire GatesAir from an affiliate of The Gores Group. Details of the transaction were not disclosed.

WorldCast Systems' Ecreso FM 1kW is a 2U FM transmitter designed to achieve up to 76% efficiency (AC to RF). Patented SmartFM technology can further reduce energy consumption by up to 40%. Features include a five-band audio processor, a stereo encoder plus new full RDS and UECP capabilities. An embedded APT IP decoder directly ingests AOIP to the FM modulator and is compatible with both SureStream and APTmpX. “Our mission is to provide our customers with the most advanced solutions that reduce their operating costs while supporting them in delivering the best FM service to their listeners,” says David Houze, Ecreso Product Manager at WorldCast Systems. “All our Ecreso transmitters are backed with a 10-year warranty.”