Broadcast Automation: Getting it Right 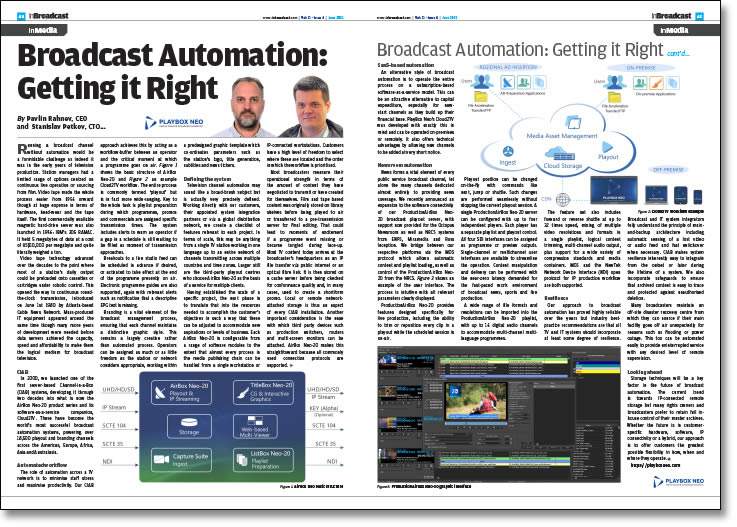 Running a broadcast channel without automation would be a formidable challenge as indeed it was in the early years of television production. Station managers had a limited range of options centred on continuous live operation or sourcing from film. Video tape made the whole process easier from 1956 onward though at huge expense in terms of hardware, head-wear and the tape itself. The first commercially available magnetic hard-drive server was also launched in 1956: IBM’s 305 RAMAC. It held 5 megabytes of data at a cost of US$10,000 per megabyte and quite literally weighed a ton.

Video tape technology advanced over the decades to the point where most of a station’s daily output could be preloaded onto cassettes or cartridges under robotic control. This opened the way to continuous round-the-clock transmission, introduced on June 1st 1980 by Atlanta-based Cable News Network. Mass-produced IT equipment appeared around the same time though many more years of development were needed before data servers achieved the capacity, speed and affordability to make them the logical medium for broadcast television.

CIAB
In 2000, we launched one of the first server-based Channel-in-a-Box (CIAB) systems, developing it through two decades into what is now the AirBox Neo-20 product series and its software-as-a-service companion, Cloud2TV. These have become the world’s most successful broadcast automation systems, powering over 18,500 playout and branding channels across the Americas, Europe, Africa, Asia and Australasia.

Automated workflow
The role of automation across a TV network is to minimise staff stress and maximise productivity. Our CIAB approach achieves this by acting as a workflow-buffer between an operator and the critical moment at which a programme goes on air. Figure 1 shows the basic structure of AirBox Neo-20 and Figure 2 an example Cloud2TV workflow. The entire process is commonly termed ‘playout’ but is in fact more wide-ranging. Key to the whole task is playlist preparation during which programmes, promos and commercials are assigned specific transmission times. The system includes alerts to warn an operator if a gap in a schedule is still waiting to be filled as moment of transmission approaches.

Breakouts to a live studio feed can be scheduled in advance if desired, or activated to take effect at the end of the programme presently on air. Electronic programme guides are also supported, again with relevant alerts such as notification that a descriptive EPG text is missing.

Branding is a vital element of the broadcast management process, ensuring that each channel maintains a distinctive graphic style. This remains a largely creative rather than automated process. Operators can be assigned as much or as little freedom as the station or network considers appropriate, working within a predesigned graphic template which co-ordinates parameters such as the station’s logo, title generation, subtitles and news tickers.

Defining the system
Television channel automation may sound like a broad-brush subject but is actually very precisely defined. Working directly with our customers, their appointed system integration partners or via a global distribution network, we create a checklist of features relevant to each project. In terms of scale, this may be anything from a single TV station working in one language up to an entire network of channels transmitting across multiple countries and time zones. Larger still are the third-party playout centres who choose AirBox Neo-20 as the basis of a service for multiple clients.

Having established the scale of a specific project, the next phase is to translate that into the resources needed to accomplish the customer’s objectives in such a way that these can be adjusted to accommodate new aspirations or levels of business. Each AirBox Neo-20 is configurable from a range of software modules to the extent that almost every process in the media publishing chain can be handled from a single workstation or IP-connected workstations. Customers have a high level of freedom to select where these are located and the order in which the workflow is prioritised.

Most broadcasters measure their operational strength in terms of the amount of content they have negotiated to transmit or have created for themselves. Film and tape based content was originally stored on library shelves before being played to air or transferred to a pre-transmission server for final editing. That could lead to moments of excitement if a programme went missing or became tangled during lace-up. Most TV content today arrives at the broadcaster’s headquarters as an IP file transfer via public internet or an optical fibre link. It is then stored on a cache server before being checked for conformance quality and, in many cases, used to create a shortform promo. Local or remote network-attached storage is thus an aspect of every CIAB installation. Another important consideration is the ease with which third party devices such as production switchers, routers and multi-screen monitors can be attached. AirBox Neo-20 makes this straightforward because all commonly used connection protocols are supported.

SaaS-based automation
An alternative style of broadcast automation is to operate the entire process on a subscription-based software-as-a-service model. This can be an attractive alternative to capital expenditure, especially for new-start channels as they build up their financial base. PlayBox Neo’s Cloud2TV was developed with exactly this in mind and can be operated on-premises or remotely. It also offers technical advantages by allowing new channels to be added at very short notice.

Newsroom automation
News forms a vital element of every public service broadcast channel, let alone the many channels dedicated almost entirely to providing news coverage. We recently announced an expansion to the software connectivity of our ProductionAirBox Neo-20 broadcast playout server, with support now provided for the Octopus Newsroom as well as NRCS systems from ENPS, Miramedia and Ross Inception. We bridge between our respective platforms via the MOS protocol which allows automatic content and playlist loading, as well as control of the ProductionAirBox Neo-20 from the NRCS. Figure 3 shows an example of the user interface. The process is intuitive with all relevant parameters clearly displayed.

ProductionAirBox Neo-20 provides features designed specifically for live production, including the ability to trim or reposition every clip in a playout while the scheduled session is on-air.

Playout position can be changed on-the-fly with commands like next, jump or shuttle. Such changes are performed seamlessly without stopping the current playout session. A single ProductionAirBox Neo-20 server can be configured with up to four independent players. Each player has a separate playlist and playout control. All four SDI interfaces can be assigned as programme or preview outputs. Single-channel or multichannel user interfaces are available to streamline the operation. Content manipulation and delivery can be performed with the near-zero latency demanded for the fast-paced work environment of broadcast news, sports and live production.

A wide range of file formats and resolutions can be imported into the ProductionAirBox Neo-20 playlist, with up to 16 digital audio channels to accommodate multi-channel multi-language programmes.

The feature set also includes forward or reverse shuttle at up to 32 times speed, mixing of multiple video resolutions and formats in a single playlist, logical content trimming, multi-channel audio output, plus support for a wide variety of compression standards and media containers. MOS and the NewTek Network Device Interface (NDI) open protocol for IP production workflow are both supported.

Resilience
Our approach to broadcast automation has proved highly reliable over the years but industry best-practice recommendations are that all TV and IT systems should incorporate at least some degree of resilience. Broadcast and IT system integrators fully understand the principle of main-and-backup architecture including automatic sensing of a lost video or audio feed and fast switchover when necessary. CIAB makes system resilience inherently easy to integrate from the outset or later during the lifetime of a system. We also incorporate safeguards to ensure that archived content is easy to trace and protected against unauthorised deletion.

Many broadcasters maintain an off-site disaster recovery centre from which they can source if their main facility goes off air unexpectedly for reasons such as flooding or power outage. This too can be automated easily to provide uninterrupted service with any desired level of remote supervision.

Looking ahead
Storage techniques will be a key factor in the future of broadcast automation. The current trend is towards IP-connected remote storage but many rights owners and broadcasters prefer to retain full in-house control of their master archives. Whether the future is in customer-specific hardware, software, IP connectivity or a hybrid, our approach is to offer customers the greatest possible flexibility in how, when and where they operate. https://playboxneo.com 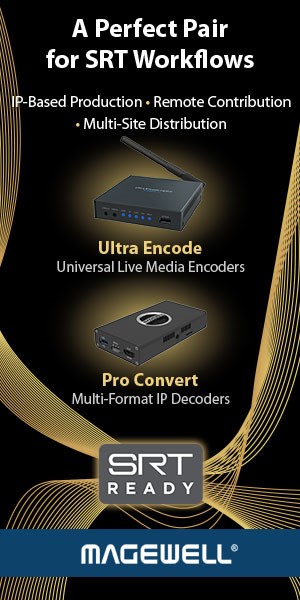