A Summer of Playing to the whistle 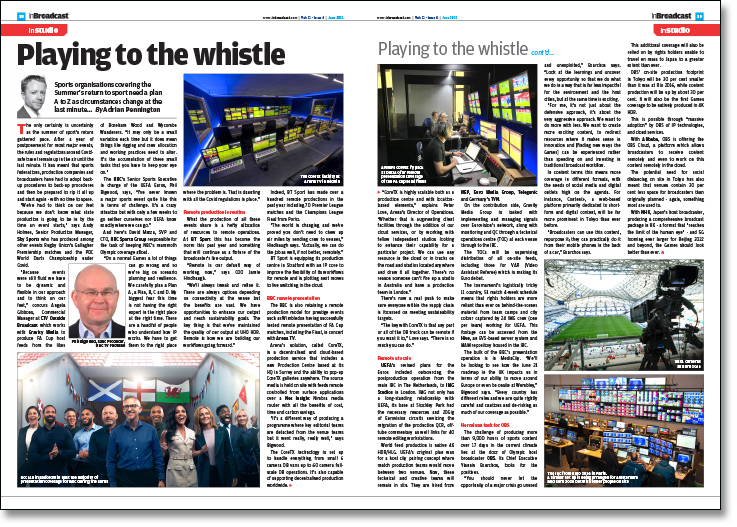 The only certainty is uncertainty as the summer of sport’s return gathered pace. After a year of postponement for most major events, the rules and regulations around Covid-safe travel remain up in the air until the last minute. It has meant that sports federations, production companies and broadcasters have had to adopt back-up procedures to back-up procedures and then be prepared to rip it all up and start again - with no time to spare.

“We’ve had to think on our feet because we don’t know what state production is going to be in by the time an event starts,” says Andy Holmes, Senior Production Manager, Sky Sports who has produced among other events Rugby Union’s Gallagher Premiership matches and the PDC World Darts Championship under Covid.

“Because events were still fluid we have to be dynamic and flexible in our approach and to think on our feet,” concurs Angela Gibbons, Commercial Manager at CTV Outside Broadcast which works with Gravity Media to produce FA Cup host feeds from the likes of Boreham Wood and Wycombe Wanderers. “It may only be a small variation each time but it does mean things like rigging and crew allocation and working practices need to alter. It’s the accumulation of these small tasks that you have to keep your eye on.”

The BBC’s Senior Sports Executive in charge of the UEFA Euros, Phil Bigwood, says, “I’ve never known a major sports event quite like this in terms of challenge. It’s a crazy situation but with only a few weeks to go neither ourselves nor UEFA know exactly where we can go.”

“On a normal Games a lot of things can go wrong and so we’re big on scenario planning and resilience. We carefully plan a Plan A, a Plan, B, C and D. My biggest fear this time is not having the right expert in the right place at the right time. There are a handful of people who understand how IP works. We have to get them to the right place where the problem is. That is daunting with all the Covid regulations in place.”

Remote production is routine
What the production of all these events share is a hefty allocation of resources to remote operations. At BT Sport this has become the norm this past year and something that will continue as a fixture of the broadcaster’s live output.

“Remote is our default way of working now,” says COO Jamie Hindhaugh. “We’ll always tweak and refine it. There are always options depending on connectivity at the venue but the benefits are vast. We have opportunities to enhance our output and reach sustainability goals. The key thing is that we’ve maintained the quality of our output at UHD HDR. Remote is how we are building our workflows going forward.”

Indeed, BT Sport has made over a hundred remote productions in the past year including 70 Premier League matches and the Champions League Final from Porto.

“The world is changing and we’ve proved you don’t need to chew up air miles by sending crew to venues,” Hindhaugh says. “Actually, we can do the job as well, if not better, remotely.” BT Sport is equipping its production centre in Stratford with an IP core to improve the flexibility of its workflows for remote and is plotting next moves to live switching in the cloud.

Arena’s solution, called CoreTX, is a decentralised and cloud-based production service that includes a new Production Centre based at its HQ in Surrey and the ability to pop-up CoreTX galleries anywhere. The source media is held on site with feeds remote controlled from surface applications over a Net Insight Nimbra media router with all the benefits of cost, time and carbon savings.

“It’s a different way of producing a programme where key editorial teams are detached from the venue teams but it went really, really well,” says Bigwood.

The CoreTX technology is set up to handle everything from small 6 camera OB vans up to 60 camera full-scale OB operations. It’s also capable of supporting decentralised production worldwide.

“CoreTX is highly scalable both as a production centre and with location-based elements,” explains Peter Love, Arena’s Director of Operations. “Whether that is augmenting client facilities through the addition of our cloud services, or by working with fellow independent studios looking to enhance their capability for a particular project. We can use any resource in the cloud or in trucks on the road and studios located anywhere and draw it all together. There’s no reason someone can’t fire up a studio in Australia and have a production team in London.”

There’s now a real push to make sure everyone within the supply chain is focussed on meeting sustainability targets.

“The key with CoreTX is that any part or all of the OB truck can be remote if you want it to,” Love says. “There is so much you can do.”

Remote at scale
UEFA’s revised plans for the Euros included outsourcing the postproduction operation from the main IBC in The Netherlands, to IMG Studios in London. IMG not only has a long-standing relationship with UEFA, its base at Stockley Park had the necessary resources and 20Gig of Eurovision circuits servicing the migration of the production QCR, off-tube commentary as well links for 40 remote editing workstations.

World feed production is native 4K HDR/HLG. UEFA’s original plan was for a host city pairing concept where match production teams would move between two venues. Now, these technical and creative teams will remain in situ. They are hired from NEP, Euro Media Group, Telegenic and Germany’s TVN.

On the contribution side, Gravity Media Group is tasked with implementing and managing signals over Eurovision’s network, along with monitoring and QC through a technical operations centre (TOC) at each venue through to the IBC.

The TOCs will be supervising distribution of all on-site feeds, including those for VAR (Video Assistant Referee) which is making its Euro debut.

The tournament’s logistically tricky 11 country, 51 match 4-week schedule means that rights holders are more reliant than ever on behind-the-scenes material from team camps and city colour captured by 24 IMG crew (one per team) working for UEFA. This footage can be accessed from the Hive, an EVS-based server system and MAM repository housed in the IBC.

The bulk of the BBC’s presentation operation is in MediaCity. “We’ll be looking to see how the June 21 roadmap in the UK impacts us in terms of our ability to move around Europe or even be onsite at Wembley,” Bigwood says.

“Every country has different rules and we are quite rightly careful and cautious and de-risking as much of our coverage as possible.”
Herculean task for OBS

The challenge of producing more than 9,000 hours of sports content over 17 days in the current climate lies at the door of Olympic host broadcaster OBS. Its Chief Executive Yiannis Exarchos, looks for the positives.

“You should never let the opportunity of a major crisis go unused and unexploited,” Exarchos says. “Look at the learnings and uncover every opportunity so that we do what we do in a way that is far less impactful for the environment and the host cities, but at the same time is exciting.

“For me, it’s not just about the defensive approach, it’s about the very aggressive approach. We want to do more with less. We want to create more exciting content, to redirect resources where it makes sense in innovation and [finding new ways the Games] can be experienced rather than spending on and investing in traditional broadcast workflow.

In content terms this means more coverage in different formats, with the needs of social media and digital outlets high on the agenda. For instance, Content+, a web-based platform primarily dedicated to short-form and digital content, will be far more prominent in Tokyo than ever before.

“Broadcasters can use this content, repurpose it; they can practically do it from their mobile phones in the back of a car,” Exarchos says.

This additional coverage will also be relied on by rights holders unable to travel en mass to Japan to a greater extent than ever.

OBS’ on-site production footprint in Tokyo will be 30 per cent smaller than it was at Rio 2016, while content production will be up by about 30 per cent. It will also be the first Games coverage to be natively produced in 4K HDR.

This is possible through “massive adoption” by OBS of IP technologies, and cloud services.

The potential need for social distancing on site in Tokyo has also meant that venues contain 30 per cent less space for broadcasters than originally planned - again, something most are used to.

With NHK, Japan’s host broadcaster, producing a comprehensive broadcast package in 8K - a format that “reaches the limit of the human eye” - and 5G looming ever larger for Beijing 2022 and beyond, the Games should look better than ever.