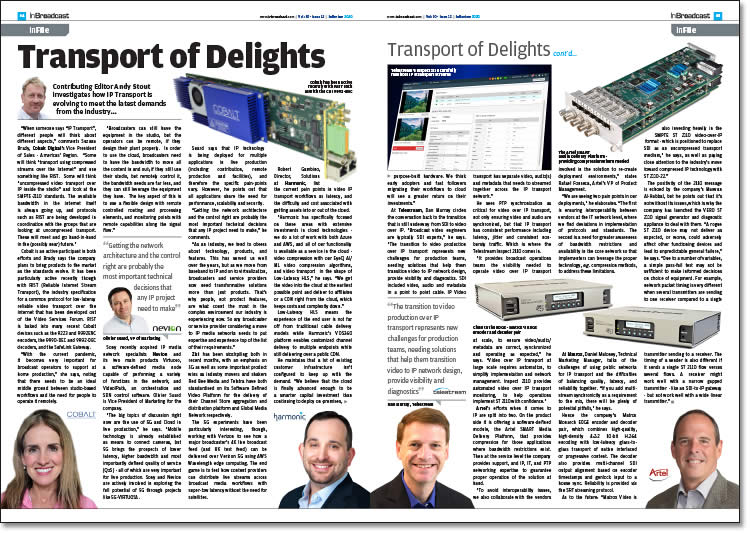 “When someone says “IP Transport”, different people will think about different aspects,” comments Suzana Brady, Cobalt Digital’s Vice President of Sales - Americas’ Region.  “Some will think “transport using compressed streams over the Internet” and use something like RIST.  Some will think “uncompressed video transport over IP inside the studio” and look at the SMPTE-2110 standards. The available bandwidth in the internet itself is always going up, and protocols such as RIST are being developed in coordination with the groups that are looking at uncompressed transport.  These will meet and go hand-in-hand in the (possibly near) future.”

Cobalt is an active participant in both efforts and Brady says the company plans to bring products to the market as the standards evolve. It has been particularly active recently though with RIST (Reliable Internet Stream Transport), the industry specification for a common protocol for low-latency reliable video transport over the internet that has been developed out of the Video Services Forum. RIST is baked into many recent Cobalt devices such as the 9223 and 9992ENC encoders, the 9990-DEC and 9992-DEC decoders, and the SafeLink Gateway.

“With the current pandemic, it becomes very important for broadcast operators to support at home production,” she says, noting that there needs to be an ideal middle ground between studio-based workflows and the need for people to operate it remotely.

“Broadcasters can still have the equipment in the studio, but the operators can be remote, if they design their plant properly.  In order to use the cloud, broadcasters need to have the bandwidth to move all the content in and out; if they still use their studio, but remotely control it, the bandwidth needs are far less, and they can still leverage the equipment they have.  The key aspect of this is to use a flexible design with remote controlled routing and processing elements, and monitoring points with remote capabilities along the signal flow.” Sony recently acquired IP media network specialists Nevion and its two main products Virtuoso, a software-defined media node capable of performing a variety of functions in the network, and VideoIPath, an orchestration and SDN control software. Olivier Suard is Vice President of Marketing for the company.

“The big topics of discussion right now are the use of 5G and Cloud in live production,” he says. “Mobile technology is already established as means to connect cameras, but 5G brings the prospects of lower latency, higher bandwidth and most importantly defined quality of service (QoS) - all of which are very important for live production. Sony and Nevion are actively involved in exploring the full potential of 5G through projects like 5G-VIRTUOSA.

Suard says that IP technology is being deployed for multiple applications in live production (including contribution, remote production and facilities), and therefore the specific pain-points vary. However, he points out that all applications share the need for performance, scalability and security.

“Getting the network architecture and the control right are probably the most important technical decisions that any IP project need to make,” he comments.

“As an industry, we tend to obsess about technology, products, and features. This has served us well over the years, but as we move from baseband to IP and on to virtualization, broadcasters and service providers now need transformative solutions more than just products. That’s why people, not product features, are what count the most in the complex environment our industry is experiencing now. So any broadcaster or service provider considering a move to IP media networks needs to put expertise and experience top of the list of their requirements.”

Zixi has been stockpiling both in recent months, with an emphasis on 5G as well as some important product wins as industry movers and shakers Red Bee Media and Telstra have both standardised on its Software Defined Video Platform for the delivery of their Channel Store aggregation and distribution platform and Global Media Network respectively.

The 5G experiments have been particularly interesting, though, working with Verizon to see how a major broadcaster’s 4K live broadcast feed (and 8K test feed) can be delivered over Verizon 5G using AWS Wavelength edge computing. The end game is to test how content providers can distribute live streams across broadcast media workflows with super-low latency without the need for satellites.

Robert Gambino, Director, Solutions at Harmonic, list the current pain points in video IP transport workflows as latency, and the difficulty and cost associated with getting assets into or out of the cloud.

“Harmonic has specifically focused on these areas with extensive investments in cloud technologies - we do a lot of work with both Azure and AWS, and all of our functionality is available as a service in the cloud - video compression with our EyeQ AI/ML video compression algorithms, and video transport  in the shape of Low-Latency HLS,” he says. “We get the video into the cloud at the earliest possible point and deliver to affiliates or a CDN right from the cloud, which keeps costs and complexity down.”

Low-Latency HLS means the experience of the end user is not far off from traditional cable delivery models while Harmonic’s VOS360 platform enables customized channel delivery to multiple endpoints while still delivering over a public CDN.

He maintains that a lot of existing customer infrastructure isn’t configured to keep up with the demand. “We believe that the cloud is finally advanced enough to be a smarter capital investment than continuing to deploy on-premises, purpose-built hardware. We think early adopters and fast followers migrating their workflows to cloud will see a greater return on their investments.”

At Telestream, Dan Murray circles the conversation back to the transition that is still underway from SDI to video over IP. “Broadcast video engineers are typically SDI experts,” he says. “The transition to video production over IP transport represents new challenges for production teams, needing solutions that help them transition video to IP network design, provide visibility and diagnostics. SDI included video, audio and metadata in a point to point cable. IP Video transport has separate video, audio(s) and metadata that needs to streamed together across the IP transport network.”

He sees PTP synchronization as critical for video over IP transport, not only ensuring video and audio are synchronized, but that IP transport has consistent performance including latency, jitter and consistent non-bursty traffic. Which is where the Telestream Inspect 2110 comes in.

Artel’s efforts when it comes to IP are split into two. On the product side it is offering a software-defined module, the Artel SMART Media Delivery Platform, that provides compression for those applications where bandwidth restrictions exist. Then at the service level the company provides support, and IP, IT, and PTP networking expertise to guarantee proper operation of the solution at hand.

“To avoid interoperability issues, we also collaborate with the vendors involved in the solution to re-create deployment environments,” states Rafael Fonseca, Artel’s VP of Product Management.

“We are seeing two pain points in our deployments,” he elaborates. “The first is ensuring interoperability between vendors at the IT network level, where we find deviations in implementation of protocols and standards. The second is a need for greater awareness of bandwidth restrictions and availability in the core network so that implementers can leverage the proper technology, e.g. compression methods, to address these limitations.

At Matrox, Daniel Maloney, Technical Marketing Manager, talks of the challenges of using public networks for IP transport and the difficulties of balancing quality, latency, and reliability together. “If you add multi-stream synchronicity as a requirement to the mix, there will be plenty of potential pitfalls,” he says.

As to the future: “Matrox Video is also investing heavily in the SMPTE ST 2110 video-over-IP format - which is positioned to replace SDI as an uncompressed transport medium,” he says, as well as paying close attention to the industry’s move toward compressed IP technology with ST 2110-22.”

The positivity of the 2110 message is echoed by the company’s Marwan Al-Habbal, but he points out that it’s not without its issues, which is why the company has launched the VERO ST 2110 signal generator and diagnostic appliance to deal with them. “A rogue ST 2110 device may not deliver as expected, or worse, could adversely affect other functioning devices and lead to unpredictable general failure,” he says. “Due to a number of variables, a simple pass-fail test may not be sufficient to make informed decisions on choice of equipment. For example, network packet timing is very different when several transmitters are sending to one receiver compared to a single transmitter sending to a receiver. The timing of a sender is also different if it sends a single ST 2110 flow versus several flows. A receiver might work well with a narrow gapped transmitter - like an SDI-to-IP gateway - but not work well with a wide linear transmitter.”