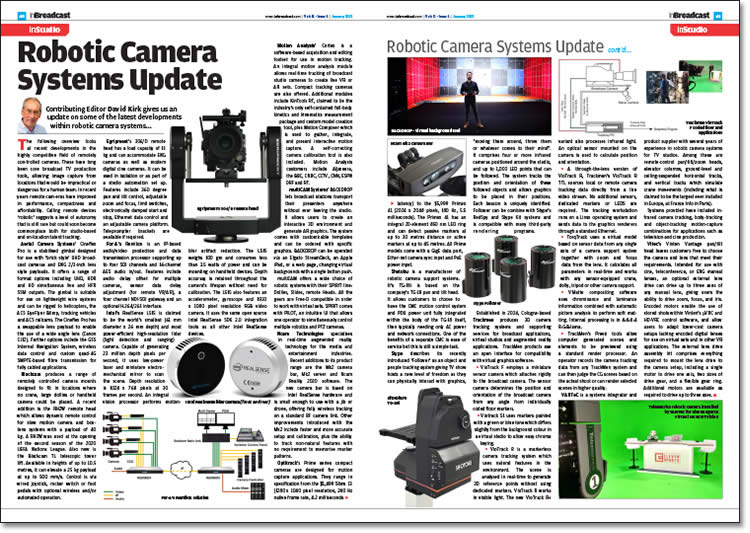 The following overview looks at recent developments in the highly competitive field of remotely con-trolled cameras. These have long been core broadcast TV production tools, allowing image capture from locations that would be impractical or dangerous for a human team. In recent years remote cam-eras have improved in performance, compactness and affordability. Calling remote devices ‘robotic’ suggests a level of autonomy that is still rare but could soon become commonplace both for studio-based and on-location talent tracking.

Aerial Camera Systems’ Cineflex Pro is a stabilised gimbal designed for use with ‘brick style’ UHD broad-cast cameras and ENG 2/3-inch lens style payloads. It offers a range of format options including UHD, HDR and HD simultaneous live and HFR SSM outputs. The gimbal is suitable for use on lightweight wire systems and can be rigged to helicopters, the ACS EyeFlyer Blimp, tracking vehicles and ACS railcams. The Cineflex Pro has a swappable lens payload to enable the use of a wide angle lens (Canon CJ12). Further options include the GSS Internal Navigation System, wireless data control and custom quad-4G SMPTE-based fibre transmission for fully cabled applications.

Blackcam produces a range of remotely controlled camera mounts designed to fit in locations where no crane, large dollies or handheld camera could be placed. A recent addition is the RH2W remote head which allows dynamic remote control for slow motion camera and box-lens systems with a payload of 40 kg. A RH2W was used at the opening of the second season of the 2020 UEFA Nations League. Also new is the Blackcam TL telescopic tower lift. Available in heights of up to 10.5 metres, it can elevate a 25 kg payload at up to 500 mm/s. Control is via wired joystick, rocker switch or foot pedals with optional wireless and/or automated operation.

Egripment’s 306/D remote head has a load capacity of 15 kg and can accommodate ENG cameras as well as modern digital cine cameras. It can be used in isolation or as part of a studio automation set up. Features include 360 degree pan and tilt control, adjustable zoom and focus, limit switches, electronically damped start and stop, Ethernet data control and an adjustable camera platform. Teleprompter brackets are available if required.

Intel’s RealSense L515 is claimed to be the world’s smallest (61 mm diameter x 26 mm depth) and most power-efficient high-resolution lidar (light detection and ranging) camera. Capable of generating 23 million depth pixels per second, it uses low-power laser and miniature electro-mechanical mirror to scan the scene. Depth resolution is 1024 x 768 pixels at 30 frames per second. An integral vision processor performs motion-blur artifact reduction. The L515 weighs 100 gm and consumes less than 3.5 watts of power and can be mounting on handheld devices. Depth accuracy is retained throughout the camera’s lifespan without need for calibration. The L515 also features an accelerometer, gyroscope and 1920 x 1080 pixel resolution RGB video camera. It uses the same open source Intel RealSense SDK 2.0 integration tools as all other Intel RealSense devices.

multiCAM Systems’ BACKDROP lets broadcast stations transport their presenters anywhere without ever leaving the studio. It allows users to create an interactive 3D environment and generate AR graphics. The system comes with customizable templates and can be ordered with specific graphics. BACKDROP can be operated via an Elgato StreamDeck, an Apple iPad, or a web page, changing virtual backgrounds with a single button push.

multiCAM offers a wide choice of robotic systems with their SPIRIT line: Dollies, Slides, remote Heads. All the gears are Free-D compatible in order to work with virtual sets. SPIRIT comes with PILOT, an intuitive UI that allows one operator to simultaneously control multiple robotics and PTZ cameras.

Ncam Technologies specialises in real-time augmented reality technology for the media and entertainment industries. Recent additions to its product range are the Mk2 camera bar, Mk2 server and Ncam Reality 2020 software. The new camera bar is based on Intel RealSense hardware and is small enough to use with a jib or drone, offering fully wireless tracking on a standard RF camera link. Other improvements introduced with the Mk2 include faster and more accurate setup and calibration, plus the ability to track non-natural features with no requirement to memorise marker patterns.

Shotoku is a manufacturer of robotic camera support systems. It’s TG-18i is based on the company’s TG-18 pan and tilt head. It allows customers to choose to have the CMC motion control system and PDU power unit fully integrated within the body of the TG-18 itself, then typically needing only AC power and network connections. One of the benefits of a separate CMC is ease of service but this is still a simple task.

Stype describes its recently introduced ‘Follower’ as an object and people tracking system giving TV show hosts a new level of freedom as they can physically interact with graphics, “moving them around, throw them or whatever comes to their mind”. It comprises four or more infrared cameras positioned around the studio, and up to 1,000 LED points that can be followed. The system tracks the position and orientation of these followed objects and allows graphics to be placed in their positions.  Each beacon is uniquely identified. Follower can be combine with Stype’s RedSpy and Stype Kit systems and is compatible with many third-party rendering programs.

VANTeC is a systems integrator and product supplier with several years of experience in robotic camera systems for TV studios. Among these are remote-control pan/tilt/zoom heads, elevator columns, ground-level and ceiling-suspended horizontal tracks, and vertical tracks which simulate crane movements (including what is claimed to be the largest ever installed in Europe, at France Info in Paris).

Systems provided have included infrared camera tracking, body-tracking and object-tracking motion-capture combinations for applications such as television and cine production.

Vitec’s Vinten Vantage pan/tilt head leaves customers free to choose the camera and lens that meet their requirements. Intended for use with cine, teleconference, or ENG manual lenses, an optional external lens drive can drive up to three axes of any manual lens, giving users the ability to drive zoom, focus, and iris. Encoded motors enable the use of stored shots within Vinten’s μVRC and HD-VRC control software, and allow users to adapt lower-cost camera setups lacking encoded digital lenses for use on virtual sets and in other VR applications. The external lens drive assembly kit comprises everything required to mount the lens drive to the camera setup, including a single motor to drive one axis, two sizes of drive gear, and a flexible gear ring. Additional motors are available as required to drive up to three axes.