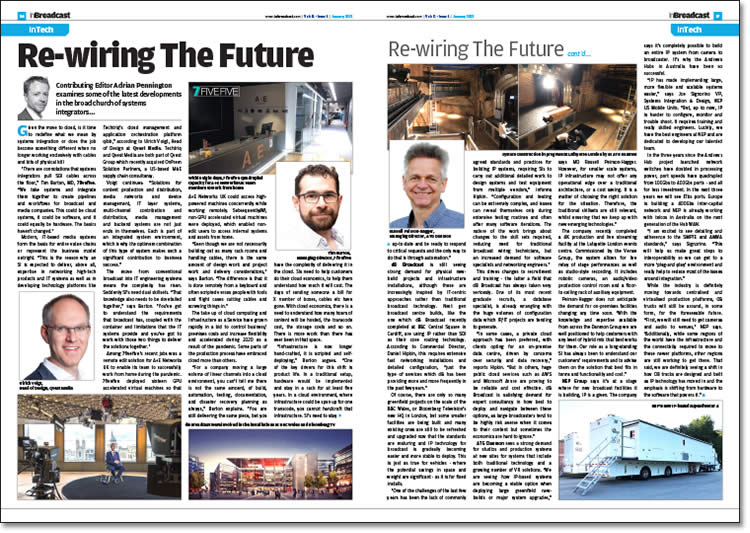 Given the move to cloud, is it time to redefine what we mean by systems integration or does the job become something different when no longer working exclusively with cables and bits of physical kit?

“There are connotations that systems integrators pull SDI cables across the floor,” Tim Burton, MD, 7fivefive. “We take systems and integrate them together to create pipelines and workflows for broadcast and media companies. This could be cloud systems, it could be software, and it could equally be hardware. The basics haven’t changed.”

Modern, IT-based media systems form the basis for entire value chains or represent the business model outright. “This is the reason why an SI is expected to deliver, above all, expertise in networking high-tech products and IT systems as well as in developing technology platforms like Techtriq’s cloud management and application orchestration platform qibb,” according to Ulrich Voigt, Head of Design at Qvest Media. Techtriq and Qvest Media are both part of Qvest Group which recently acquired OnPrem Solution Partners, a US-based M&E supply chain consultancy.

Voigt continues: “Solutions for content production and distribution, media networks and device management, IT layer systems, multi-channel contribution and distribution, media management and backend systems are not just ends in themselves. Each is part of an integrated system environment, which is why the optimum combination of this type of system makes such a significant contribution to business success.”

The move from conventional broadcast into IT engineering systems means the complexity has risen. Suddenly SI’s need dual skillsets. “That knowledge also needs to be dovetailed together,” says Burton. “You’ve got to understand the requirements that broadcast has, coupled with the container and limitations that the IT systems provide and you’ve got to work with those two things to deliver the solutions together.”

“Even though we are not necessarily building out as many rack rooms and handling cables, there is the same amount of design work and project work and delivery considerations,” says Burton. “The difference is that it is done remotely from a keyboard and often scripted versus people with tools and flight cases cutting cables and screwing things in.”

The take up of cloud computing and Infrastructure as a Service have grown rapidly in a bid to control business/premises costs and increase flexibility and accelerated during 2020 as a result of the pandemic. Some parts of the production process have embraced cloud more than others.

“For a company moving a large volume of linear channels into a cloud environment, you can’t tell me there is not the same amount, of build, automation, testing, documentation, and disaster recovery planning as always,” Burton explains. “You are still delivering the same piece, but you have the complexity of delivering it in the cloud. SIs need to help customers do their cloud economics, to help them understand how much it will cost. The days of sending someone a bill for X number of boxes, cables etc have gone. With cloud economics, there is a need to understand how many hours of content will be hosted, the transcode cost, the storage costs and so on. There is more work than there has ever been in that space.

“Infrastructure is now longer hand-crafted, it is scripted and self-deploying,” Burton argues. “One of the key drivers for this shift is product life. In a traditional setup, hardware would be implemented and stay in a rack for at least five years. In a cloud environment, where infrastructure could be spun up for one transcode, you cannot handcraft that infrastructure. SI’s need to stay    up-to-date and be ready to respond to critical requests and the only way to do that is through automation.”

dB Broadcast is still seeing strong demand for physical new-build projects and infrastructure installations, although these are increasingly inspired by IT-centric approaches rather than traditional broadcast technology. Next gen broadcast centre builds, like the one which dB Broadcast recently completed at BBC Central Square in Cardiff, are using IP rather than SDI as their core routing technology. According to Commercial Director, Daniel Hipkin, this requires extensive fast networking installations and detailed configuration, “just the type of services which dB has been providing more and more frequently in the past few years.”

Of course, there are only so many greenfield projects on the scale of the BBC Wales, or Bloomberg Television’s new HQ in London, but some smaller facilities are being built and many existing ones are still to be refreshed and upgraded now that the standards are maturing and IP technology for broadcast is gradually becoming easier and more stable to deploy. This is just as true for vehicles - where the potential savings in space and weight are significant - as it is for fixed installs.

“One of the challenges of the last few years has been the lack of commonly agreed standards and practices for building IP systems, requiring SIs to carry out additional detailed work to design systems and test equipment from multiple vendors,” informs Hipkin. “Configuration and testing can be extremely complex, and issues can reveal themselves only during extensive testing routines and often after many software iterations. The nature of the work brings about changes to the skill sets required, reducing need for traditional broadcast wiring technicians, but an increased demand for software specialists and networking engineers.”

This drives changes to recruitment and training - the latter a field that dB Broadcast has always taken very seriously. One of its most recent graduate recruits, a database specialist, is already wrangling with the huge volumes of configuration data which IP/IT projects are tending to generate.

“In some cases, a private cloud approach has been preferred, with clients opting for an on-premise data centre, driven by concerns over security and data recovery,” reports Hipkin. “But in others, huge public cloud services such as AWS and Microsoft Azure are proving to be reliable and cost effective. dB Broadcast is satisfying demand for expert consultancy in how best to deploy and navigate between these options, as large broadcasters tend to be highly risk averse when it comes to their content but sometimes the economics are hard to ignore.”

ATG Danmon sees a strong demand for studios and production systems at new sites for systems that include both traditional technology and a growing number of VR solutions. “We are seeing how IP-based systems are becoming a viable option when deploying large greenfield new-builds or major system upgrades,” says MD Russell Peirson-Hagger. However, for smaller scale systems, IP infrastructure may not offer any operational edge over a traditional architecture, or a cost saving. It is a matter of choosing the right solution for the situation. Therefore, the traditional skillsets are still relevant, whilst ensuring that we keep up with new emerging technologies.”

The company recently completed a 4K production and live streaming facility at the Lafayette London events centre. Commissioned by the Venue Group, the system allows for live relay of stage performances as well as studio-style recording. It includes robotic cameras, an audio/video production control room and a floor-to-ceiling rack of auxiliary equipment.

Peirson-Hagger does not anticipate the demand for on-premises facilities changing any time soon. “With the knowledge and expertise available from across the Danmon Group we are well positioned to help customers with any level of hybrid mix that best works for them. Our role as a long-standing SI has always been to understand our customers’ requirements and to advise them on the solution that best fits in terms and functionality and cost.”

NEP Group says it’s at a stage where for new broadcast facilities it is building, IP is a given. The company says it’s completely possible to build an entire IP system from camera to broadcaster. It’s why the Andrews Hubs in Australia have been so successful.

“IP has made implementing large, more flexible and scalable systems easier,” says Joe Signorino VP, Systems Integration & Design, NEP US Mobile Units. “But, up to now, IP is harder to configure, monitor and trouble shoot. It requires training and really skilled engineers. Luckily, we have the best engineers at NEP and are dedicated to developing our talented team.

In the three years since the Andrews Hub project launched network switches have doubled in processing power, port speeds have quadrupled from 100Gbs to 400Gbs ports - and all for less investment. In the next three years we will see 1Tbs ports. Europe is building a 400Gbs inter-capital network and NEP is already working with telcos in Australia on the next generation of the Hub WAN. “I am excited to see detailing and adherence to the SMPTE and AMWA standards,” says Signorino. “This will help us make great steps to interoperability so we can get to a more ‘plug-and-play’ environment and really help to reduce most of the issues around integration.”

While the industry is definitely moving towards centralised and virtualised production platforms, OB trucks will still be around, in some form, for the foreseeable future. “First, we will still need to get cameras and audio to venues,” NEP says. “Additionally, while some regions of the world have the infrastructure and the connectivity required to move to these newer platforms, other regions are still working to get there. That said, we are definitely seeing a shift in how OB trucks are designed and built as IP technology has moved in and the emphasis is shifting from hardware to the software that powers it.”