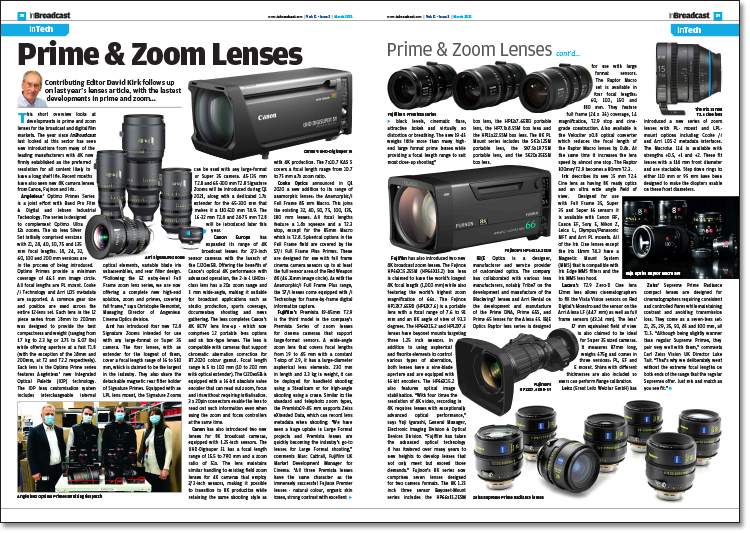 Contributing Editor David Kirk follows up on last year’s lenses article, with the lastest developments in prime and zoom...

This short overview looks at developments in prime and zoom lenses for the broadcast and digital film markets. The year since InBroadcast last looked at this sector has seen new introductions from many of the leading manufacturers with 4K now firmly established as the preferred resolution for all content likely to have a long shelf life. Recent months have also seen new 8K camera lenses from Canon, Fujinon and Irix.

Angénieux’ Optimo Primes Series is a joint effort with Band Pro Film & Digital and Jebsen Industrial Technology. The series is designed to complement Optimo Ultra 12x zooms. The six lens Silver Set initially comprised versions with 21, 28, 40, 50, 75 and 135 mm focal lengths. 18, 24, 32, 60, 100 and 200 mm versions are in the process of being introduced. Optimo Primes provide a minimum coverage of 46.5 mm image circle. All focal lengths are PL mount. Cooke /i Technology and Arri LDS metadata are supported. A common gear size and position are used across the entire 12-lens set. Each lens in the 12 piece series from 18mm to 200mm was designed to provide the best compactness and weight (ranging from 1.7 kg to 2.3 kg or 3.75 to 5.07 lbs) while offering aperture at a fast T1.8 (with the exception of the 18mm and 200mm, at T2 and T2.2 respectively). Each lens in the Optimo Prime series features Angénieux’ new Integrated Optical Palette (IOP) technology. The IOP lens customisation system includes interchangeable internal optical elements, variable blade iris subassemblies, and rear filter design. “Following the EZ entry-level Full Frame zoom lens series, we are now offering a complete new high-end solution, zoom and primes, covering full frame,” says Christophe Remontet, Managing Director of Angenieux Cinema Optics division.

Arri has introduced four new T2.8 Signature Zooms intended for use with any large-format or Super 35 camera. The four lenses, with an extender for the longest of them, cover a focal length range of 16 to 510 mm, which is claimed to be the largest in the industry. They also share the detachable magnetic rear filter holder of Signature Primes. Equipped with an LPL lens mount, the Signature Zooms can be used with any large-format or Super 35 camera. 45-135 mm T2.8 and 65-300 mm T2.8 Signature Zooms will be introduced during Q1 2021, along with a dedicated 1.7x extender for the 65-300 mm that makes it a 110-510 mm T4.9. The 16-32 mm T2.8 and 24-75 mm T2.8 will be introduced later this year.

Canon Europe has expanded its range of 4K broadcast lenses for 2/3-inch sensor cameras with the launch of the CJ20ex5B. Offering the benefits of Canon’s optical 4K performance with advanced operation, the 2-in-1 UHDxs-class lens has a 20x zoom range and 5 mm wide-angle, making it suitable for broadcast applications such as studio production, sports coverage, documentary shooting and news gathering. The lens completes Canon’s 4K BCTV lens line-up - which now comprises 12 portable lens options and six box-type lenses. The lens is compatible with cameras that support chromatic aberration correction for BT.2020 colour gamut. Focal length range is 5 to 100 mm (10 to 200 mm with optical extender). The CJ20ex5B is equipped with a 16-bit absolute value encoder that can read out zoom, focus and iris without requiring initialisation. 3 x 20pin connectors enable the lens to read out such information even when using the zoom and focus controllers at the same time.

Canon has also introduced two new lenses for 8K broadcast cameras, equipped with 1.25-inch sensors. The UHD-Digisuper 51 has a focal length range of 15.5 to 790 mm and a zoom ratio of 51x. The lens maintains similar handling to existing field zoom lenses for 4K cameras that employ 2/3-inch sensors, making it possible to transition to 8K production while retaining the same shooting style as with 4K production. The 7x10.7 KAS S covers a focal length range from 10.7 to 75 mm a 7x zoom ratio.

Cooke Optics announced in Q1 2020 a new addition to its range of anamorphic lenses: the Anamorphic/i Full Frame 85 mm Macro. This joins the existing 32, 40, 50, 75, 100, 135, 180 mm lenses. All focal lengths feature a 1.8x squeeze and a T2.3 stop, except for the 85mm Macro which is T2.8. Spherical options in the Full Frame field are covered by the S7/i Full Frame Plus Primes. These are designed for use with full frame cinema camera sensors up to at least the full sensor area of the Red Weapon 8K (46.31mm image circle). As with the Anamorphic/i Full Frame Plus range, the S7/i lenses come equipped with /i Technology for frame-by-frame digital information capture.

Fujifilm’s Premista 19-45mm T2.9 is the third model in the company’s Premista Series of zoom lenses for cinema cameras that support large-format sensors. A wide-angle zoom lens that covers focal lengths from 19 to 45 mm with a constant T-stop of 2.9, it has a large-diameter aspherical lens elements. 230 mm in length and 3.3 kg in weight, it can be deployed for handheld shooting using a Steadicam or for high-angle shooting using a crane.

IB(E Optics is a designer, manufacturer and service provider of customized optics. The company has collaborated with various lens manufacturers, notably Tribe7 on the development and manufacture of the Blackwing7 lenses and Arri Rental on the development and manufacture of the Prime DNA, Prime 65S, and Prime 65 lenses for the Alexa 65. IB(E Optics Raptor lens series is designed for use with large format sensors. The Raptor Macro set is available in four focal lengths: 60, 100, 150 and 180 mm. They feature full frame (24 x 36) coverage, 1:1 magnification, T2.9 stop and cine-grade construction. Also available is the Velociter x0.8 optical converter which reduces the focal length of the Raptor Macro lenses by 0.8x. At the same time it increases the lens speed by almost one stop. The Raptor 100mm/T2.9 becomes a 80mm T2.3.

Irix describes its new 15 mm T2.6 Cine lens as having 8K ready optics and an ultra wide angle field of view.  Designed for use with Full Frame 35, Super 35 and Super 16 sensors it is available with Canon RF, Canon EF, Sony E, Nikon Z, Leica L, Olympus/Panasonic MFT and Arri PL mounts. All of the Irix Cine lenses except the Irix 11mm T4.3 have a Magnetic Mount System (MMS) that is compatible with Irix Edge MMS filters and the Irix MMS lens hood.

Leitz (Ernst Leitz Wetzlar GmbH) has introduced a new series of zoom lenses with PL- mount and LPL-mount options including Cooke /i and Arri LDS-2 metadata interfaces. The Macrolux 114 is available with strengths +0.5, +1 and +2. These fit lenses with a 114 mm front diameter and are stackable. Step down rings to either 110 mm or 95 mm have been designed to make the diopters usable on these front diameters.

Zeiss’ Supreme Prime Radiance compact lenses are designed for cinematographers requiring consistent and controlled flares while maintaining contrast and avoiding transmission loss. They come as a seven-lens set: 21, 25, 29, 35, 50, 85 and 100 mm, all T1.5. “Although being slightly warmer than regular Supreme Primes, they pair very well with them,” comments Carl Zeiss Vision UK Director Luke Tait. “That’s why we deliberately went without the extreme focal lengths on both ends of the range that the regular Supremes offer. Just mix and match as you see fit.”