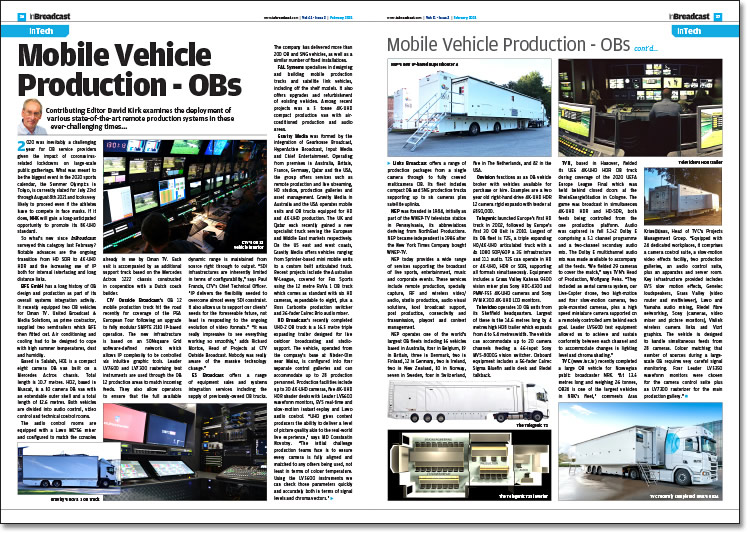 2020 was inevitably a challenging year for OB service providers given the impact of coronavirus-related lockdowns on large-scale public gatherings. What was meant to be the biggest event in the 2020 sports calendar, the Summer Olympics in Tokyo, is currently slated for July 23rd through August 8th 2021 and looks very likely to proceed even if the athletes have to compete in face masks. If it does, NHK will gain a long-anticipated opportunity to promote its 8K-UHD standard.

So what’s new since InBroadcast surveyed this category last February? Notable advances are the ongoing transition from HD SDR to 4K-UHD HDR and the increasing use of IP both for internal interfacing and long distance links.

BFE GmbH has a long history of OB design and production as part of its overall systems integration activity. It recently equipped two OB vehicles for Oman TV. United Broadcast & Media Solutions, as prime contractor, supplied two semitrailers which BFE then fitted out. Air conditioning and cooling had to be designed to cope with high summer temperatures, dust and humidity.

Based in Salalah, HD1 is a compact eight camera OB van built on a Mercedes Actros chassis. Total length is 10.7 metres. HD2, based in Muscat, is a 10 camera OB van with an extendable outer shell and a total length of 12.6 metres. Both vehicles are divided into audio control, video control and technical control rooms.

The audio control rooms are equipped with a Lawo MC256 mixer and configured to match the consoles already in use by Oman TV. Each unit is accompanied by an additional support truck based on the Mercedes Actros 1222 chassis constructed in cooperation with a Dutch coach builder.

CTV Outside Broadcast’s OB 12 mobile production truck hit the road recently for coverage of the PGA European Tour following an upgrade to fully modular SMPTE 2110 IP-based operation. The new infrastructure is based on an SDNsquare Grid software-defined network which allows IP complexity to be controlled via intuitive graphic tools. Leader LV7600 and LV7300 rasterising test instruments are used through the OB 12 production areas to match incoming feeds. They also allow operators to ensure that the full available dynamic range is maintained from source right through to output. “SDI infrastructures are inherently limited in terms of configurability,” says Paul Francis, CTV’s Chief Technical Officer. “IP delivers the flexibility needed to overcome almost every SDI constraint. It also allows us to support our clients’ needs for the foreseeable future, not least in responding to the ongoing evolution of video formats.” “It was really impressive to see everything working so smoothly,” adds Richard Morton, Head of Projects at CTV Outside Broadcast. Nobody was really aware of the massive technology change.”

ES Broadcast offers a range of equipment sales and systems integration services including the supply of previously-owned OB trucks. The company has delivered more than 200 OB and SNG vehicles, as well as a similar number of fixed installations.

FAL Systems specialises in designing and building mobile production trucks and satellite link vehicles, including off the shelf models. It also offers upgrades and refurbishment of existing vehicles. Among recent projects was a 5 tonne 4K-UHD compact production van with air-conditioned production and audio areas.

HD Broadcast’s recently completed UHD-2 OB truck is a 16.5 metre triple expanding trailer designed for live outdoor broadcasting and studio-support. The vehicle, operated from the company’s base at Nieder-Olm near Mainz, is configured into four separate control galleries and can accommodate up to 28 production personnel. Production facilities include up to 30 4K-UHD cameras, five 4K-UHD HDR shader desks with Leader LV5600 waveform monitors, EVS real-time and slow-motion instant-replay and Lawo audio control. “UHD gives content producers the ability to deliver a level of picture quality akin to the real-world live experience,” says MD Constantin Novotny. “The initial challenge production teams face is to ensure every camera is fully aligned and matched to any others being used, not least in terms of colour temperature. Using the LV5600 instruments we can check those parameters quickly and accurately both in terms of signal levels and chroma vectors.”
Links Broadcast offers a range of production packages from a single camera through to fully crewed multicamera OB. Its fleet includes compact OB and SNG production trucks supporting up to six cameras plus satellite uplinks. NEP was founded in 1984, initially as part of the WNEP-TV television station in Pennsylvania, its
abbreviations deriving from NorthEast Productions. NEP became independent in 1986 after the New York Times Company bought WNEP-TV.

NEP operates one of the world’s largest OB fleets including 16 vehicles based in Australia, four in Belgium, 19 in Britain, three in Denmark, two in Finland, 12 in Germany, two in Ireland, two in New Zealand, 10 in Norway, seven in Sweden, four in Switzerland, five in The Netherlands, and 82 in the USA.

Televideo operates 10 OB units from its Sheffield headquarters. Largest of these is the 14.6 metres long by 4 metres high HD8 trailer which expands from 4 to 5.4 metres width. The vehicle can accommodate up to 20 camera channels feeding a 66-input Sony MVS-8000G vision switcher. Onboard equipment includes a 56-fader Calrec Sigma Bluefin audio desk and Riedel talkback. TVN, based in Hanover, fielded its UE6 4K-UHD HDR OB truck during coverage of the 2020 UEFA Europe League Final which was held behind closed doors at the RheinEnergieStadion in Cologne. The game was broadcast in simultaneous 4K-UHD HDR and HD-SDR, both feeds being controlled from the one production platform. Audio was captured in full 5.1+2 Dolby E comprising a 5.1 channel programme and a two-channel secondary audio mix. The Dolby E multichannel audio mix was made available to accompany all the feeds. “We fielded 29 cameras to cover the match,” says TVN’s Head of Production, Wolfgang Peiss. “They included an aerial camera system, our Live-Copter drone, two high-motion and four slow-motion cameras, two pole-mounted cameras, plus a high speed miniature camera supported on a remotely controlled arm behind each goal. Leader LV5600 test equipment allowed us to achieve and sustain conformity between each channel and to accommodate changes in lighting level and chroma shading.”