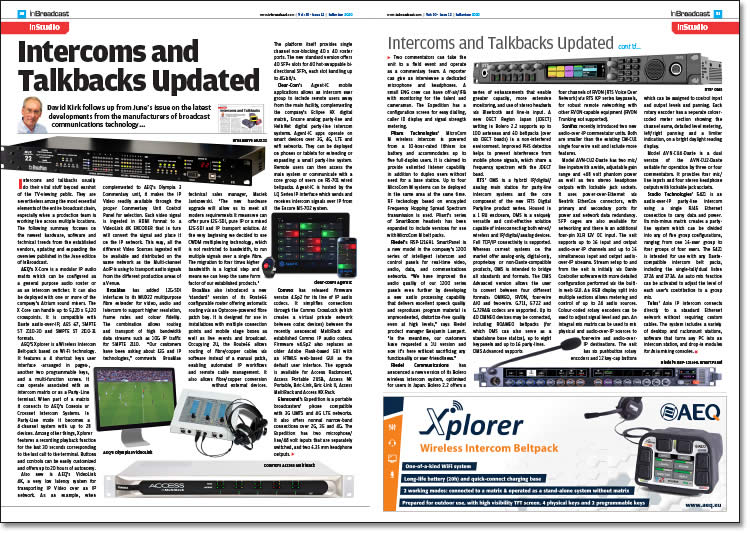 Intercoms and talkbacks usually do their vital stuff beyond earshot of the TV-viewing public. They are nevertheless among the most essential elements of the entire broadcast chain, especially when a production team is working live across multiple locations. The following summary focuses on the newest hardware, software and technical trends from the established vendors, updating and expanding the overview published in the June edition of InBroadcast.

AEQ’s X-Core is a modular IP audio matrix which can be configured as a general purpose audio router or as an intercom switcher. It can also be deployed with one or more of the company’s Atrium sound mixers. The X-Core can handle up to 5,120 x 5,120 crosspoints. It is compatible with Dante audio-over-IP, AES 67, SMPTE ST 2110-30 and SMPTE ST 2110-31 formats.

AEQ’S Xplorer is a Wireless Intercom Belt-pack based on Wi-Fi technology. It features a 4 shortcut keys user interface -arranged in pages-, another two programmable keys, and a multi-function screen. It can operate associated with an intercom matrix or as a Party-Line terminal. When part of a matrix it connects to AEQ’s Conexia or Crossnet Intercom Systems. In Party-Line mode it becomes a 4-channel system with up to 28 devices. Among other things, Xplorer features a recording playback function for the last 30 seconds corresponding to the last call to the terminal. Buttons and controls can be easily customized and offers up to 20 hours of autonomy.

Also new is AEQ’s VideoLink 4K, a very low latency system for transporting IP Video over an IP network. As an example, when complemented to AEQ’s Olympia 3 Commentary unit, it makes the IP Video readily available through the proper Commentary Unit Control Panel for selection. Each video signal is ingested in HDMI format to a VideoLink 4K ENCODER that in turn will convert the signal and place it on the IP network. This way, all the different Video Sources ingested will be available and distributed on the same network as the Multi-channel AoIP is using to transport audio signals from the different production areas of a Venue.

BroaMan has added 12G-SDI interfaces to its MUX22 multipurpose fibre extender for video, audio and Intercom to support higher resolution, frame rates and colour fidelity. The combination allows routing and transport of high bandwidth data streams such as 10G IP traffic for SMPTE 2110.  “Our customers have been asking about 12G and IP technologies,” comments  BroaMan technical sales manager, Maciek Janiszewski. “The new hardware upgrade will allow us to meet all modern requirements It means we can offer pure 12G-SDI, pure IP or a mixed 12G-SDI and IP transport solution. At the very beginning we decided to use CWDM multiplexing technology, which is not restricted to bandwidth, to run multiple signals over a single fibre. The migration to four times higher bandwidth is a logical step and means we can keep the same form factor of our established products.”

BroaMan also introduced a new ‘standard’ version of its Route66 configurable router offering automatic routing via an Optocore-powered fibre patch bay. It is designed for use in installations with multiple connection points and mobile stage boxes as well as live events and broadcast.

Clear-Com’s Agent-IC mobile applications allows an intercom user group to include remote users away from the main facility, complementing the company’s Eclipse HX digital matrix, Encore analog party-line and HelixNet digital party-line intercom systems. Agent-IC apps operate on smart devices over 3G, 4G, LTE and wifi networks. They can be deployed on phones or tablets for extending or expanding a small party-line system. Remote users can then access the main system or communicate with a core group of users on RS-701 wired beltpacks. Agent-IC is hosted by the LQ Series IP interface which sends and receives intercom signals over IP from the Encore MS-702 system.

Two commentators can take the unit to a field event and operate as a commentary team. A reporter can give an interviewee a dedicated microphone and headphones. A small ENG crew can have off-air/IFB with monitoring for the talent and cameraman. The Expedition has a configuration screen for easy dialling, caller ID display and signal strength metering.

Pliant Technologies’ MicroCom M wireless intercom is powered from a 10-hour-rated lithium ion battery and accommodates up to five full-duplex users. It is claimed to provide unlimited listener capability in addition to duplex users without need for a base station. Up to four MicroCom M systems can be deployed in the same area at the same time. RF technology based on encrypted Frequency Hopping Spread Spectrum transmission is used. Pliant’s series of SmartBoom headsets has been expanded to include versions for use with MicroCom M belt packs.

Riedel’s RSP-1216HL SmartPanel is a new model in the company’s 1200 series of intelligent intercom and control panels for real-time video, audio, data, and communications networks. “We have improved the audio quality of our 1200 series panels even further by developing a new audio processing capability that delivers excellent speech quality and reproduces program material in unprecedented, distortion-free quality even at high levels,” says Riedel product manager Benjamin Lampert. “In the meantime, our customers have requested a 1U version and now it’s here without sacrificing any functionality or user-friendliness.”

Riedel Communications has announced a new version of its Bolero wireless intercom system, optimised for users in Japan. Bolero 2.2 offers a series of enhancements that enable greater capacity, more extensive monitoring, and use of stereo headsets via Bluetooth and line-in input. A new DECT Region Japan (JDECT) setting in Bolero 2.2 supports up to 100 antennas and 60 beltpacks (over six DECT bands) in a non-interfered environment. Improved PHS detection helps to prevent interference from mobile phone signals, which share a frequency spectrum with the JDECT band.

RTS’ OMS is a hybrid IP/digital/analog main station for party-line intercom systems and the core component of the new RTS Digital Partyline product series. Housed in a 1 RU enclosure, OMS is a uniquely versatile and cost-effective solution capable of interconnecting both wired/wireless and IP/digital/analog devices. Full TCP/IP connectivity is supported. Whereas current systems on the market offer analog-only, digital-only, proprietary or non-Dante-compatible products, OMS is intended to bridge all standards and formats. The OMS Advanced version allows the user to convert between four different formats: OMNEO, RVON, four-wire AIO and two-wire. G.711, G.722 and G.729AB codecs are supported. Up to 40 OMNEO devices may be connected, including ROAMEO beltpacks (for which OMS can also serve as a standalone base station), up to eight keypanels and up to 16 party-lines. OMS Advanced supports four channels of RVON (RTS Voice Over Network) via RTS KP series keypanels, for robust remote networking with other RVON-capable equipment (RVON Trunking not supported). Sonifex recently introduced two new audio-over-IP commentator units. Both are smaller than the existing CM-CU1 single four-wire unit and include more features.

Model AVN-CU2-Dante has two mic/line inputs with a wide, adjustable gain range and +48 volt phantom power as well as two stereo headphone outputs with lockable jack sockets. It uses power-over-Ethernet via Neutrik EtherCon connectors, with primary and secondary ports for power and network data redundancy. SFP cages are also available for networking and there is an additional four-pin XLR 12V DC input. The unit supports up to 16 input and output audio-over-IP channels and up to 16 simultaneous input and output audio-over-IP streams. Stream setup to and from the unit is initially via Dante Controller software with more detailed configuration performed via the built-in web GUI. An RGB display split into multiple sections allows metering and control of up to 24 audio sources. Colour-coded rotary encoders can be used to adjust signal level and pan. An integral mix matrix can be used to mix physical and audio-over-IP sources to four-wire and audio-over-IP destinations. The unit has six pushbutton rotary encoders and 12 key-cap buttons which can be assigned to control input and output levels and panning. Each rotary encoder has a separate colour-coded meter section showing the channel name, detailed level metering, left/right panning and a limiter indication, on a bright daylight reading display.

Model AVN-CU4-Dante is a dual version of the AVN-CU2-Dante suitable for operation by three or four commentators. It provides four mic/line inputs and four stereo headphone outputs with lockable jack sockets.

Studio Technologies’ 5421 is an audio-over-IP party-line intercom using a single RJ45 Ethernet connection to carry data and power. Its mix-minus matrix creates a party-line system which can be divided into any of five group configurations, ranging from one 16-user group to four groups of four users. The 5421 is intended for use with any Dante-compatible intercom belt packs, including the single-talk/dual listen 372A and 373A. An auto mix function can be activated to adjust the level of each user’s contribution to a group mix.

Telos’ Axia IP intercom connects directly to a standard Ethernet network without requiring custom cables. The system includes a variety of desktop and rackmount stations, software that turns any PC into an intercom station, and drop-in modules for Axia mixing consoles.