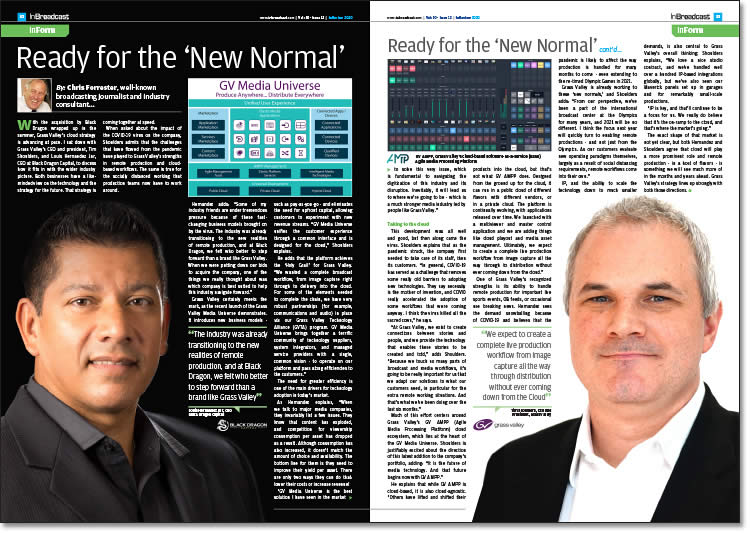 With the acquisition by Black Dragon wrapped up in the summer, Grass Valley’s cloud strategy is advancing at pace. I sat down with Grass Valley’s CEO and president, Tim Shoulders, and Louis Hernandez Jnr, CEO at Black Dragon Capital, to discuss how it fits in with the wider industry picture. Both businesses have a like-minded view on the technology and the strategy for the future. That strategy is coming together at speed.

When asked about the impact of the COVID-19 virus on the company, Shoulders admits that the challenges that have flowed from the pandemic have played to Grass Valley’s strengths in remote production and cloud-based workflows. The same is true for the socially distanced working that production teams now have to work around.

Hernandez adds: “Some of my industry friends are under tremendous pressure because of these fast-changing business models brought on by the virus. The industry was already transitioning to the new realities of remote production, and at Black Dragon, we felt who better to step forward than a brand like Grass Valley. When we were putting down our bids to acquire the company, one of the things we really thought about was which company is best suited to help this industry navigate forward.”

Grass Valley certainly meets the mark, as the recent launch of the Grass Valley Media Universe demonstrates. It introduces new business models - such as pay-as-you-go - and eliminates the need for upfront capital, allowing customers to experiment with new revenue streams. “GV Media Universe unifies the customer experience through a common interface and is designed for the cloud,” Shoulders explains.

He adds that the platform achieves the ‘Holy Grail’ for Grass Valley. “We wanted a complete broadcast workflow, from image capture right through to delivery into the cloud. For some of the elements needed to complete the chain, we have very robust partnerships (for example, communications and audio) in place via our Grass Valley Technology Alliance (GVTA) program. GV Media Universe brings together a terrific community of technology suppliers, system integrators, and managed service providers with a single, common vision - to operate on our platform and pass along efficiencies to the customers.”

The need for greater efficiency is one of the main drivers for technology adoption in today’s market.  As Hernandez explains, “When we talk to major media companies, they invariably list a few issues. They know that content has exploded, and competition for viewership consumption per asset has dropped as a result. Although consumption has also increased, it doesn’t match the amount of choice and availability. The bottom line for them is they need to improve their yield per asset. There are only two ways they can do that: lower their costs or increase revenue!

“GV Media Universe is the best solution I have seen in the market   to solve this very issue, which is fundamental to navigating the digitization of this industry and its disruption. Inevitably, it will lead us to where we’re going to be - which is a much stronger media industry led by people like Grass Valley.”

Taking to the cloud This development was all well and good, but then along came the virus. Shoulders explains that as the pandemic struck, the company first needed to take care of its staff, then its customers. “In general, COVID-19 has served as a challenge that removes some really old barriers to adopting new technologies. They say necessity is the mother of invention, and COVID really accelerated the adoption of some workflows that were coming anyway. I think the virus killed all the sacred cows,” he says.

“At Grass Valley, we exist to create connections between stories and people, and we provide the technology that enables these stories to be created and told,” adds Shoulders. “Because we touch so many parts of broadcast and media workflows, it’s going to be really important for us that we adapt our solutions to what our customers need, in particular for the extra remote working situations. And that’s what we’ve been doing over the last six months.”

Much of this effort centers around Grass Valley’s GV AMPP (Agile Media Processing Platform) cloud ecosystem, which lies at the heart of the GV Media Universe. Shoulders is justifiably excited about the direction of this latest addition to the company’s portfolio, adding: “It is the future of media technology. And that future begins now with GV AMPP.”

He explains that while GV AMPP is cloud-based, it is also cloud-agnostic. “Others have lifted and shifted their products into the cloud, but that’s not what GV AMPP does. Designed from the ground up for the cloud, it can run in a public cloud of different flavors with different vendors, or in a private cloud. The platform is continually evolving, with applications released over time. We launched with a multiviewer and master control application and we are adding things like cloud playout and media asset management. Ultimately, we expect to create a complete live production workflow from image capture all the way through to distribution without ever coming down from the cloud.”

One of Grass Valley’s recognized strengths is its ability to handle remote production for important live sports events, OB feeds, or occasional use breaking news. Hernandez sees the demand snowballing because of COVID-19 and believes that the pandemic is likely to affect the way production is handled for many months to come - even extending to the re-timed Olympic Games in 2021.

Grass Valley is already working to these ‘new normals,’ and Shoulders adds: “From our perspective, we’ve been a part of the international broadcast center at the Olympics for many years, and 2021 will be no different. I think the focus next year will quickly turn to enabling remote productions - and not just from the Olympics. As our customers evaluate new operating paradigms themselves, largely as a result of social distancing requirements, remote workflows come into their own.”

IP, and the ability to scale the technology down to much smaller demands, is also central to Grass Valley’s overall thinking. Shoulders explains, “We love a nice studio contract, and we’ve handled well over a hundred IP-based integrations globally, but we’ve also seen our Maverick panels set up in garages and for remarkably small-scale productions.

“IP is key, and that’ll continue to be a focus for us. We really do believe that it’s the on-ramp to the cloud, and that’s where the market’s going.”

The exact shape of that market is not yet clear, but both Hernandez and Shoulders agree that cloud will play a more prominent role and remote production - in a host of flavors - is something we will see much more of in the months and years ahead. Grass Valley’s strategy lines up strongly with both those directions.