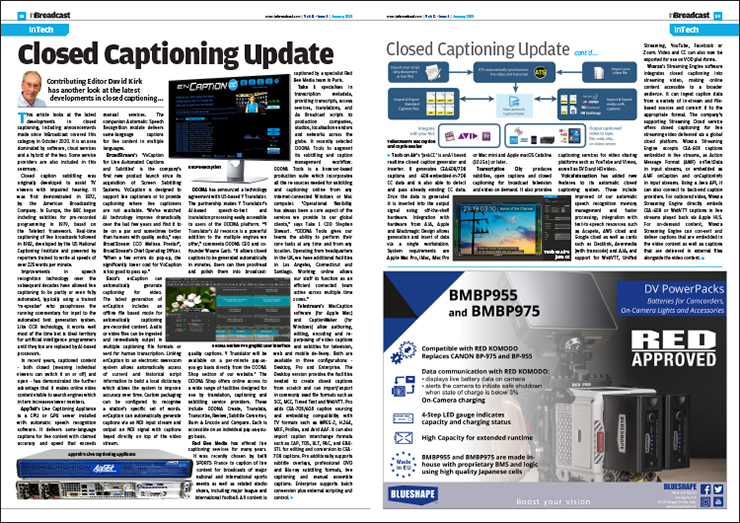 This article looks at the latest developments in closed captioning, including announcements made since InBroadcast covered this category in October 2020. It is an area dominated by software, cloud services and a hybrid of the two. Some service providers are also included in this summary.

Closed caption subtitling was originally developed to assist TV viewers with impaired hearing. It was first demonstrated in 1972, by the American Broadcasting Company. In Europe, the BBC began including subtitles for pre-recorded programming in 1979, based on the Teletext framework. Real-time captioning of live broadcasts followed in 1982, developed by the US National Captioning Institute and powered by reporters trained to write at speeds of over 225 words per minute.

Improvements in speech recognition technology over the subsequent decades have allowed live captioning to be partly or even fully automated, typically using a trained ‘re-speaker’ who paraphrases the running commentary for input to the automated text generation system. Like OCR technology, it works well most of the time but is ideal territory for artificial intelligence programmers until they too are replaced by AI-based processors.

In recent years, captioned content - both closed (meaning individual viewers can switch it on or off) and open - has demonstrated the further advantage that it makes online video content visible to search engines which in turn increases viewer numbers.

AppTek’s Live Captioning Appliance is a CPU or GPU server installed with automatic speech recognition software. It delivers same-language captions for live content with claimed accuracy and speed that exceeds manual services. The companion Automatic Speech Recognition module delivers same-language captions for live content in multiple languages. BroadStream’s ‘VoCaption for Live Automated Captions and Subtitles’ is the company’s first new product launch since its acquisition of Screen Subtitling Systems. VoCaption is designed to support live captioners or to provide captioning where live captioners are not available. “We’ve watched AI technology improve dramatically over the last few years and find it to be on a par and sometimes better than humans with quality audio,” says BroadStream COO Melissa Preslar”, BroadStream’s Chief Operating Officer. “When a few errors do pop-up, the significantly lower cost for VoCaption is too good to pass up.”

Enco’s enCaption can automatically generate captioning for video. The latest generation of enCaption includes an offline file based mode for automatically captioning pre-recorded content. Audio or video files can be ingested and immediately output in multiple captioning file formats or sent for human transcription. Linking enCaption to an electronic newsroom system allows automatically access of current and historical script information to build a local dictionary which allows the system to improve accuracy over time. Custom packaging can be configured to recognise a station’s specific set of words. enCaption can automatically generate captions via an NDI input stream and output an NDI signal with captions keyed directly on top of the video stream.

OOONA has announced a technology agreement with US-based Y Translator. The partnership makes Y Translator’s AI-based speech-to-text and translation processing easily accessible to users of the OOONA platform. “Y Translator’s AI resource is a powerful addition to the multiple engines we offer,” comments OOONA CEO and co-founder Wayne Garb. “It allows closed captions to be generated automatically in minutes. Users can then proofread and polish them into broadcast-quality captions. Y Translator will be available on a per-minute pay-as-you-go basis directly from the OOONA Shop section of our website.” The OOONA Shop offers online access to a wide range of facilities designed for use by translation, captioning and subtitling service providers. These include OOONA Create, Translate, Transcribe, Review, Subtitle Converter, Burn & Encode and Compare. Each is accessible on an individual pay-as-you-go basis.

Red Bee Media has offered live captioning services for many years. It was recently chosen by beIN SPORTS France to caption of live content for broadcasts of major national and international sports events as well as related studio shows, including major league and international football. All content is captioned by a specialist Red Bee Media team in Paris.

Take 1 specialises in transcription metadata, providing transcripts, access services, translations, and As Broadcast scripts to production companies, studios, localisation vendors and networks across the globe. It recently selected OOONA Tools to augment its subtitling and caption management workflow. OOONA Tools is a browser-based production suite which incorporates all the re-sources needed for subtitling and captioning online from any internet-connected Windows or Mac computer. “Operational flexibility has always been a core aspect of the services we provide to our global clients,” says Take 1 COO Stephen Stewart. “OOONA Tools gives our teams the ability to perform their core tasks at any time and from any location. Operating from headquarters in the UK, we have additional facilities in Los Angeles, Connecticut and Santiago. Working online allows our staff to function as an efficient connected team active across multiple time zones.”

Tools on Air’s ‘just:CC’ is an AI based realtime closed caption generator and inserter. It generates CEA608/708 captions and 608-embedded-in-708 CC data and is also able to detect and pass already existing CC data. Once the data is generated it is inserted into the output signal using off-the-shelf hardware. Integration with hardware from AJA, Apple and Blackmagic Design allows generation and insert of data via a single workstation. System requirements are Apple Mac Pro, iMac, iMac Pro or Mac mini and Apple macOS Catalina (10.15.x) or later.

Transcription City produces subtitles, open captions and closed captioning for broadcast television and video on demand. It also provides captioning services for video sharing platforms such as YouTube and Vimeo, as well as DVD and HD video.

VoiceInteraction has added new features to its automatic closed captioning system. These include improved of our automatic speech recognition memory management and faster processing; integration with text-to-speech resources such as Acapela, AWS cloud and Google cloud as well as cards such as Decklink, Avermedia (with transcode) and AJA; and support for WebVTT, Unified Streaming, YouTube, Facebook or Zoom. Video and CC can also now be exported for use on VOD plat-forms. Wowza’s Streaming Engine software integrates closed captioning into streaming video, making online content accessible to a broader audience. It can ingest caption data from a variety of in-stream and file-based sources and convert it to the appropriate format. The company’s supporting Streaming Cloud service offers closed captioning for live streaming video delivered via a global cloud platform.