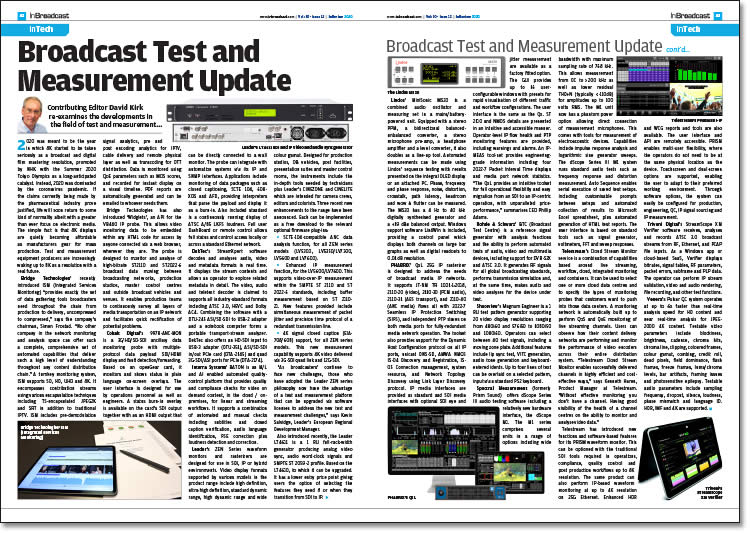 Contributing Editor David Kirk re-examines the developments in the field of test and measurement...

2020 was meant to be the year in which 8K started to be taken seriously as a broadcast and digital film mastering resolution, promoted by NHK with the Summer 2020 Tokyo Olympics as a long-anticipated catalyst. Instead, 2020 was dominated by the coronavirus pandemic. If the claims currently being made by the pharmaceutical industry prove justified, life will soon return to some kind of normality albeit with a greater than ever focus on electronic media. The simple fact is that 8K displays are quietly becoming affordable as manufacturers gear for mass production. Test and measurement equipment producers are increasingly waking up to 8K as a resolution with a real future.

Bridge Technologies’ recently introduced ISM (Integrated Services Monitoring) “provides exactly the set of data gathering tools broadcasters need throughout the chain from production to delivery, uncompressed to compressed,” says the company’s chairman, Simen Frostad. “No other company in the network monitoring and analysis space can offer such a complete, comprehensive set of automated capabilities that deliver such a high level of understanding throughout any content distribution chain.” A turnkey monitoring system, ISM supports SD, HD, UHD and 8K. It encompasses contribution streams using various encapsulation techniques including TS-encapsulated JPEG2K and SRT in addition to traditional IPTV. ISM includes pre-demodulation signal analytics, pre and post encoding analytics for IPTV, cable delivery and remote physical layer as well as transcoding for OTT distribution. Data is monitored using QoE parameters such as MOS scores, and recorded for instant display on a visual timeline. PDF reports are automatically generated and can be emailed to whoever needs them.

Bridge Technologies has also introduced ‘Widglets’, an API for the VB440 IP probe. This allows video monitoring data to be embedded within any HTML code for access by anyone connected via a web browser, wherever they are. The probe is designed to monitor and analyse of high-bitrate ST2110 and ST2022-6 broadcast data moving between broadcasting net-works, production studios, master control centres and outside broadcast vehicles and venues. It enables production teams to continuously survey all layers of media transportation on an IP network and facilitates quick rectification of potential problems.

Cobalt Digital’s 9978-ANC-MON is a 3G/HD/SD-SDI ancillary data monitoring probe with multiple-protocol data payload SDI/HDMI display and fault detection/forwarding. Based on an openGear card, it monitors and shows status in plain language on-screen overlays. The user interface is designed for use by operations personnel as well as engineers. A status burn-in overlay is available on the card’s SDI output together with as an HDMI output that can be directly connected to a wall monitor. The probe can integrate with automation systems via its IP and SNMP interfaces. Applications include monitoring of data packages such as closed captioning, SCTE 104, 608-XDS and AFD, providing interpreters that parse the payload and display it as a burn-in. Also included standard is a continuously running display of ATSC A/85 LKFS loudness. Full user DashBoard or remote control allows full status and control access locally or across a standard Ethernet network.

DekTec’s StreamXpert software decodes and analyses audio, video and metadata formats in real time. It displays the stream contents and allows an operator to explore related metadata in detail. The video, audio and teletext decoder is claimed to supports all industry-standard formats including ATSC 3.0, HEVC and Dolby AC4. Combining the software with a DTU-245 ASI/SD-SDI to USB-2 adapter and a notebook computer forms a portable transport-stream analyzer. DekTec also offers an HD-SDI input to USB-3 adapter (DTU-351), ASI/SD-SDI in/out PCIe card (DTA-2145) and quad 3G-SDI/ASI ports for PCIe (DTA-2174).

Interra Systems’ BATON is an M/L and AI enabled automated quality-control platform that provides quality and compliance checks for video on demand content, in the cloud / on-premises, for linear and streaming workflows. It supports a combination of automated and manual checks including subtitles and closed caption verification, audio language identification, PSE correction plus loudness detection and correction.

Leader’s ZEN Series waveform monitors and rasterizers are designed for use in SDI, IP or hybrid environments. Video display formats supported by various models in the product range include high definition, ultra-high definition, standard dynamic range, high dynamic range and wide colour gamut. Designed for production studios, OB vehicles, post facilities, presentation suites and master control rooms, the instruments include the in-depth tools needed by technicians plus Leader’s CINEZONE and CINELITE which are intended for camera crews, editors and colorists. Three recent new enhancements to the range have been announced. Each can be implemented as a free download to the relevant optional firmware plug-ins:

“As broadcasters’ continue to face new challenges, those who have adopted the Leader ZEN series philosophy now have the advantage of a test and measurement platform that can be upgraded via software licenses to address the new test and measurement challenges,” says Kevin Salvidge, Leader’s European Regional Development Manager.

Also introduced recently, the Leader LT4611 is a 1 RU full-rack-width generator producing analog video sync, audio word-clock signals and SMPTE ST 2059-2 profile. Based on the LT4610, to which it can be upgraded. It has a lower entry price point giving users the option of selecting the features they need if or when they transition from SDI to IP.

Lindos’ MiniSonic MS20 is a combined audio oscillator and measuring set in a mains/battery-powered unit. Equipped with a stereo PPM, a bidirectional balanced-unbalanced converter, a stereo microphone pre-amp, a headphone amplifier and a level converter, it also doubles as a line-up tool. Automated measurements can be made using Lindos’ sequence testing with results presented on the integral OLED display or an attached PC. Phase, frequency and phase response, noise, distortion, crosstalk, path latency, headroom and wow & flutter can be measured. The MS20 has a 4 Hz to 40 kHz digitally synthesised generator and a +19 dBu balanced output. Windows support software Lin4Win is included, providing a control panel which displays both channels on large bar graphs as well as digital readouts to 0.01 dB resolution.

Rohde & Schwarz’ BTC (Broadcast Test Centre) is a reference signal generator with analysis functions and the ability to perform automated tests of audio, video and multimedia devices, including support for DVB-S2X and ATSC 3.0. It generates RF signals for all global broadcasting standards, performs transmission simulation and, at the same time, makes audio and video analyses for the device under test.

Shootview’s Magnum Engineer is a 1 RU test pattern generator supporting 20 video display resolutions ranging from 480i60 and 576i50 to 1080i50 and 1080i60. Operators can select between 40 test signals, including a moving zone plate. Additional features include lip sync test, VITC generation, audio tone generation and keyboard-entered idents. Up to four lines of text can be overlaid on a selected pattern, input via a standard PS2 keyboard.

Telestream’s Cloud Stream Monitor service is a combination of capabilities based around live streaming, workflow, cloud, integrated monitoring and containers. It can be used to select one or more cloud data centres and to specify the types of monitoring probes that customers want to push into those data centers. A monitoring network is automatically built up to perform QoS and QoE monitoring of live streaming channels. Users can observe how their content delivery networks are performing and monitor the performance of video encoders across their entire distribution system. “Telestream Cloud Stream Monitor enables successfully delivered channels in highly efficient and cost-effective ways,” says Kenneth Haren, Product Manager at Telestream. “Without effective monitoring you don’t have a channel. Having good visibility of the health of a channel centres on the ability to monitor and analyse video data.”

Telestream has introduced new functions and software-based features for its PRISM waveform monitor. This can be optioned with the traditional SDI tools required in operations, compliance, quality control and post production workflows up to 8K resolution. The same product can also perform IP-based waveform monitoring at up to 4K resolution on 25G Ethernet. Enhanced HDR and WCG reports and tools are also available. The user interface and API are remotely accessible. PRISM enables multi-user flexibility, where the operators do not need to be at the same physical location as the device. Touchscreen and dual-screen options are supported, enabling the user to adapt to their preferred working environment. Through software options, the system can easily be configured for production, engineering, QC, IP signal sourcing and IP measurement.